We Played Unstable Unicorns For 5 Hours 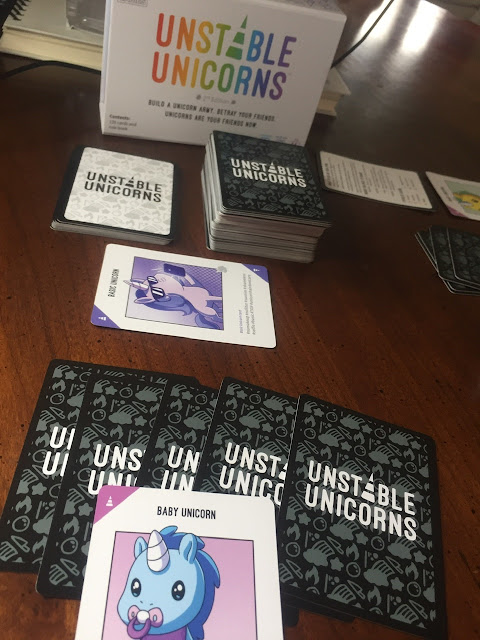 Unstable Unicorns is a strategic card game that will destroy your relationships. . . but in a good way.  Build a Unicorn Army. Betray Your Friends. Unicorns are Your Friends Now. The game was one of Kickstarter’s top 100 most backed projects of all time and has sold over a million copies worldwide.  Unstable Unicorns won the 2019 People’s Choice Award for Toy of the Year. This highly giftable game takes 30–45 minutes to play and is for 2–8 players. Available at Amazon.com for $19. (Now offering a NSFW--not safe for work edition)

With the kids homeschooling for the past two months we have spent a lot of time together. They spend most of the morning and some of the afternoon doing homework then they either get on a computer game (in my son’s case) or an iPad (my daughter’s case) and zone out. We have been going for walks, playing pool or ping pong as well as watching too much Netflix and Disney so when I received Unstable Unicorns on a cold, rainy Spring day I said “hey guys, let’s unplug and play.”

We read and re-read the instructions. We were confused. Then we searched out some video reviews after 3 we decided to jump in and see where it went. The first two games which I won (I was the first to get 7 horses in my stable more on that later), we learned more about how to play, heading back to the video reviews and a game play video a few times (the one we watched was not being played according to the instructions). By the 4th game we had it down and were a little obsessed. It was fun and we were very competitive.

There are a few things you must do before starting and it does depending on how many people are playing. You shuffle the “white” covered Baby Unicorn cards and hand everyone a Baby Unicorn card. This is the start of your stable. The winner is the first to reach 7 unicorns.   Place the remaining on the table. Then you shuffle and deal out 5 “black” covered cards to each player placing the remaining next to the “nursery” where the Baby Unicorn cards are placed. Next to the cards will eventually be another pile of cards called the discard pile. Make sure all these piles are near everyone because you will all need to be able to access them during the game.

There are 4 phases to your turn and it will depending on the cards in your hand. Beginning of Turn Phase, Draw Phase, Action Phase, End of Turn Phase. There are also 5 types of cards in the game. Unicorn cards (to which there are 3 different types), Magic Cards, Downgrade Cards, Upgrade Cards, and Instant Cards. 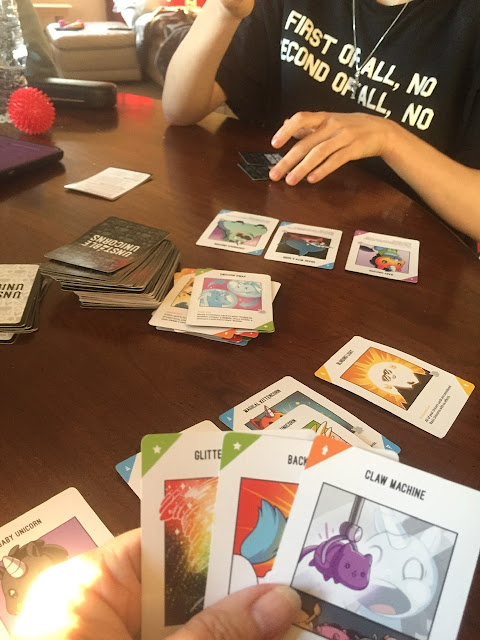 It took a few games to get into all the ins and outs of the rules and to see that when my son left and it was just my daughter and I we needed to remove some cards (it is all explained in the instruction manual). We didn’t at first and the game ended very quickly. 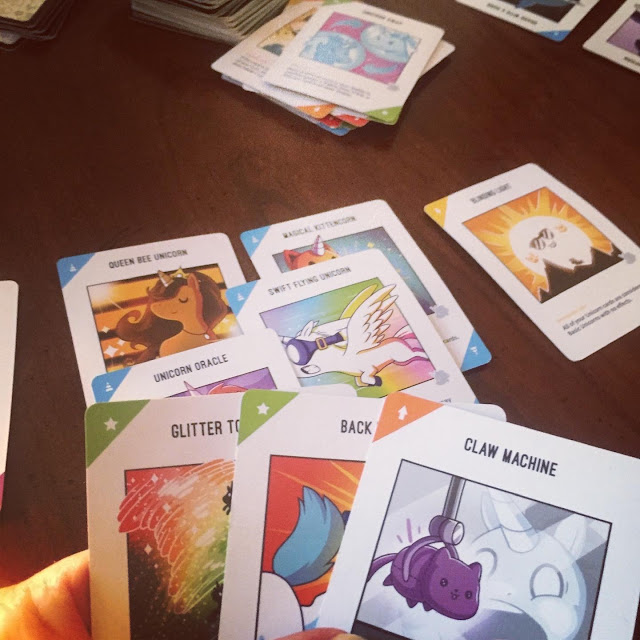 It is a fun game and once we got the hang of it we didn’t stop for 5 hours. I cannot wait to be out of quarantine so we an play with more than 3 people. It will be interesting to see how that goes.

I highly recommend this game and the pictures on the cards are really cute too. We all have our favorites!