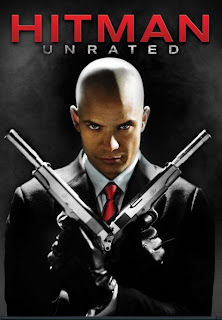 Last weekend the Hub and I watched Hitman. I was heading off to sleep when he told me that he was going to rent Hitman which I knew was a game but not a movie.

Ummm...I was intrigued. I love to see how they make movies out of books, games or whatnot. 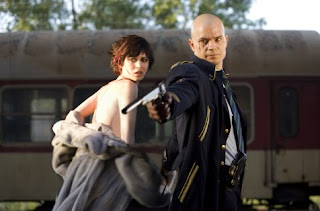 Not thinking I would be interested, I stood with my tea cup in hand, waiting for that moment when I would certainly walk away to the out reaches of the house to find a rerun, watch the Food Network or read a book.
It wasn't long before I was making my way over to the chair so I could place my cup on the windowsill, (we need some living room furniture). 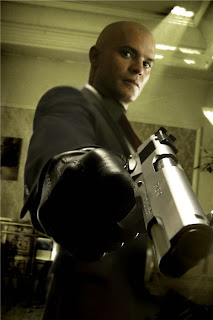 It just so happens that I had just seen the lead guy in Catch and Release with Jennifer Garner. 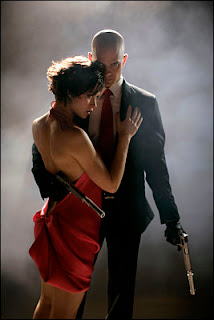 Agent 47 (or a hairless Timothy Olyphant) is a gun for hire, genetically engineered assassin. He is hired by "The Organization" and pursued by both Interpol and the Russian military.


Timothy Olyphant is sexy, if you like the quiet, bald, bar code tattoo, deadly type. He is a hitman with a heart. Is this based at all on the game? He smiles, sarcastically jokes and saves mistreated women all while trying to save himself. Arrgghhhhh...


The other guy who looked so familiar is the equally sexy Dougray Scott who I saw recently in Desperate Housewives last season, or was that the season before last season? He played Susan's married (but wife is dying and has been in a long term coma) boyfriend.


The movie was just ok and the violence was scaled down. There was flying blood and brain but really the blood scenes were super quick.


Here are some trivia tidbits

When the project was first announced, Vin Diesel was going to star as Agent 47. Despite Timothy Olyphant taking over, Diesel is still credited as executive producer.

When Agent 47 jumps through the hotel window into the kid's room, they're playing Hitman: Blood Money (2005) (VG) for the PlayStation 2. (They're playing through "Death of a Showman", the training level.)

Diana and Agent Smith, characters from the video games, make appearances in the film.

Nicolas De Toth was brought in by the studio to help cut the film (hence the thanks in the end credits) as he did with Live Free or Die Hard (2007).

WILHELM SCREAM: The famous scream is heard among the various screams when the first assassination attempt is made on Agent 47.

The movie was delayed from its October 2007 release, to late November 2007 to facilitate for re-shoots.

Timothy Olyphant underwent muscle and martial-arts training in preparation for his role.

The character of Nika (Olga Kurylenko) draws inspiration from a recurring female character from the games known as Lei Ling (changed to 'Mei Ling' in 'Contracts'). Lei/Mei Ling was a prostitute that 47 saved on two occasions, receiving vital information in return.


Olga Kurylenko was distraught after having to cut her hair for the role. She said she didn't feel like herself anymore, which she used to help her connect with her character.


Chotskies gives this movie a B for lack of blood and special effects.