The Haunted Airman: A Movie Review 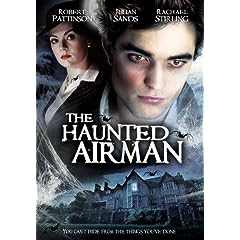 Flight Lieutenant Jugg (Twilight's Robert Pattinson), confined to a wheelchair after being wounded in action, arrives at a remote mansion in Wales to recuperate. Suffering from terrible nightmares and visions, he suspects the methods of his psychiatrist, Dr. Hal Burns (Julian Sands). His beautiful aunt, Julia (Rachael Stirling) seems to be the only person he can trust – until circumstances make him doubt even her intentions. Based on the novel “The Haunting of Toby Jugg” by Dennis Wheatley.

For obvious reasons I borrowed this movie from my library. Hello, Rob Pattinson in a bathtub, getting a sponge bath! Plus, I want to see him as someone other than Edward Cullen.

Well, let's just, say this...his character smokes too much. The movie moves too quickly. Every time I blinked it was a new morning.

So, Jug, gets injured after getting hit in the back during a mission, while in flight. He is now confined to a wheelchair and his aunt drops him off at this secluded home to get better.

If you are a Rob fan, you will love it because Rob is in the movie from beginning to end. But, as a fan of movies...well...the movie leaves you scratching your head. Is he a victim?
Is he losing his mind?
Honestly, I have no friggin clue.

The story is based on "The Haunting of Toby Jugg" (1948) by Dennis Wheatley (famous for thrillers and occult novels in the 50s and 60s).

Umm....let's see. I give this a 2 out of 5 stars but only because Rob was in it and he does a great job of brooding and acts like a guy trapped in a wheelchair, unsure of his new life.