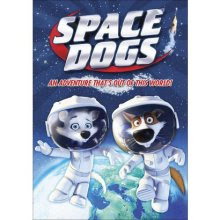 Space Dogs
Phase 4 Films
Rated G
128 min
A talented circus dog, a scrappy canine from the streets, and a fun-loving rat blast off on a journey into the stars in this animated family-oriented comedy based on the real-life adventures of Belka and Strelka, two dogs from the former Soviet Union who in 1960 became the first earthbound animals to orbit the Earth, and return home alive. When her circus act goes awry, four-legged circus performer Belka comes crashing down to Earth in her homemade rocket. That fateful accident marks the beginning of an enduring friendship with street-smart dog Strelka, and wise-cracking rodent Venya. Later, the fun-loving trio and some new friends board a rocket bound for orbit, and make history by proving that mankind has finally perfected the technology to explore space. ~ Jason Buchanan, Rovi

I love movies that my whole family can enjoy together. The movie is based on a true story which had my kids heads reeling "what? they sent two dogs into space?" I was explaining to the kids that 50 years ago two dogs went into space, returned safely, the girl Strelka eventually gave birth to puppies, with one of the puppies sent to President John F. Kennedy's daughter Caroline Kennedy and are now stuffed in the  Cosmonaut Museum in Moscow.

All this information made them even more interested in the movie. We all truly loved the story of these animal friends and their sweet faces as they worked together. Personally, I am a sucker for good CGI, this was a really great CGI movie. Great characters, great songs, great movie! Some really funny parts and some very heartwarming moments.

We have watched the movie twice already and the kids want to take it to their cousins for our Easter get together because they know "they will love it too."


Disclaimer: We received a complimentary copy of this movie from Phase 4 for our honest opinion. No monetary compensation was received.