The Woodcarver on DVD is a Family Friendly Movie! 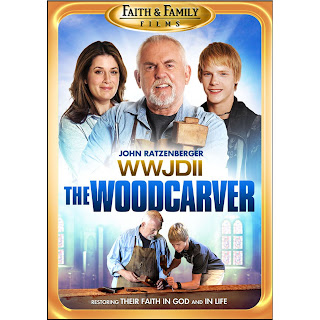 Description:
Restoring their faith in God and in Life.
Matthew Stevenson is a troubled kid from a broken home. When he vandalizes the local church to get back at his parents, Matthew has to repair the damage to the church to avoid criminal charges. While working at the church, he meets Ernest (John Ratzenberger), an accomplished wood carver who created the intricate woodwork decoration that Matthew destroyed. Ernest has become something of a hermit, but reluctantly comes out of reclusion to help repair the church. Now Ernest and Matthew must work together to preserve the church's beautiful antiquity, and along the way, they also manage to restore their faith in God and in life.

The 411 by Maria:
As someone who is more spiritual than religious I look for movies that are about people and life rather than preachy. A story where the message comes through without overdoing the religious bible thumping, brow beating, believe in God and all will be saved. That may get some negativity from those preach the bible and live their lives for the Lord. Mostly, I like to know that the story could stand on its own without bible references and this story can!

Matthew,  like most kids is a very good boy, he has issues like everyone else and is living between two parents who are going through a volatile separation.  After taking out his aggression on a church, smashing windows and writing liar on the side, he is caught a forced to repair the damage he has done.

As a parent or a caring adult, this would have been a big wake up call that things have to change but no, they yell at him and eventually he runs away. He eventually meets Ernest played by John Ratzenberger from Cheers fame who does in incredible job of playing a God fearing widow who recently lost his wife. His moments of remembrance brought tears to my eyes.

Ernest and Matthew are exactly what the other needs. Matthew needs attention and someone to steer him on the path of his greatest potential and Ernest needs something to focus his attention on.

This is a wonderful movie that may slip off the radars of those who may think it is a "religious" movie. It is that, but it is mostly a movie about people, friends, family and that what we give is what we get.

Disclosure: I received a complimentary DVD for the purpose of this review from Vivendi Entertainment.