Alvin & The Chipmunks Chipwrecked: A GIVEAWAY & Our Review Is Here 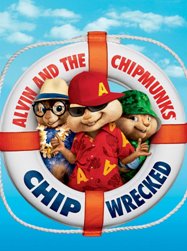 The Chipmunks, Chipettes and their caretaker Dave Seville (Jason Lee; “My Name is Earl”) embark on a trip of a lifetime aboard the Carnival Dream cruise ship. Seeking fun and excitement, the Chipmunks turn the luxury cruise liner into their own personal playground. But the ultimate vacation quickly becomes a disaster when the Chipmunks, Dave and Carnival cruise pelican mascot, who turns out to be the chipmunks’ old manager, Ian Hawke (David Cross; Megamind), accidentally fall overboard and find themselves ‘chipwrecked’ on a remote island. Stuck in an unfamiliar territory, the six furry castaways are separated from Dave and must figure out a way to survive on their own for the first time in their lives.

Written and produced by husband and wife duo Ross Bagdasarian, Jr. and Janice Karman, ALVIN AND THE CHIPMUNKS: CHIPWRECKED features a star-studded voice cast with Justin Long (Dodgeball) as Alvin, Matthew Gray Gubler (“Criminal Minds”) as Simon, Jesse McCartney (Horton Hears a Who!) as Theodore, Christina Applegate (“Up All Night”) as Brittany, Anna Faris (What’s Your Number?) as Jeanette, and Amy Poehler (“Parks and Recreation”) as Eleanor.

The 411 by Maria, Handsome and Goddess:

We were able to watch this on Wednesday which happened to be a day off due to teacher conferences or some jazz. We loved the last chipmunk movie so we had high expectations for this one.  Personally, I wasn't sure that they would be able to carry on the franchise in a way that was interesting and fresh man was I wrong. We sang through the whole movie. It is a really cute story. Goddess was in love with all the music. She has a favorite chipmunk and stated so through the whole movie. Handsome liked anytime Dave and Ian were on screen. He thinks the Chipmunks former manger is hysterical especially in the pelican suit.

In Chipwrecked, Dave takes the Chipmunks and the Chippettes on a cruise. Alvin of course ends up getting them all grounded while Dave heads to dinner to talk with the captain. Poor little Theodore ends up watching TV that is way too scary for him. My kids thought it was so cute how he couldn't just change the channel and sat there mesmerized at the creepy images before his eyes. They do the same if they wake in the middle of the night to see us watching something on Sci-Fi.

When everyone ends up overboard the chipmunks must work together to survive on an island, and yes, they do sing "I'm a survivor". The songs are some of the best parts of the movie!

If you have chipmunk fans in the house, you can't go wrong with this family friendly movie. Yes, I have seen some reviews were people talk about the "suggestive" dance moves of the Chippettes but I was watching the same stuff on the Bugs Bunny Show and Tom and Jerry too. Nothing different! I didn't see it as sexy than, and I don't see it as sexy now. Just a good family friendly movie!

a Rafflecopter giveaway  Disclaimer: I received a complimentary copy of the DVD for my honest opinion.