The Whip by Karen Kondazian 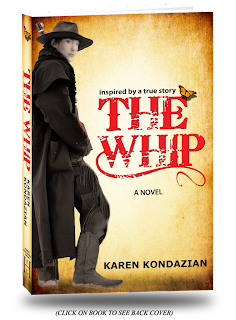 ABOUT THE NOVEL
The Whip is inspired by the true story of Charlotte “Charley” Parkhurst (1812-1879) who lived most of her extraordinary life as a man in the old west.

As a young woman in Rhode Island, she fell in love with a runaway slave and had his child. The destruction of her family drove her west to California, dressed as a man, to track the killer.

Charley became a renowned stagecoach driver for Wells Fargo. She killed a famous outlaw, had a secret love affair, and lived with a housekeeper who, unaware of her true sex, fell in love with her.

Charley was the first woman to vote in America in 1868 (as a man). Her grave lies in Watsonville, California.

The 411:
I finished this book last night after starting it just the night before. Who would have thought you could make a book about a stage coach riders back in the 1800s and make it interesting. Wow, it is not only interesting but any book that forces me to research deeper in the main topic of the book is at the top of my list.
The better part of my morning was spent researching more information on Charley Parkhurst the most famous stage coach driver. Upon her death when neighbors came to prepare "his" body, it was established that he was in fact a she and that she had given birth at one time. Born Mary, Charley ended up in an orphanage when her father remarried. She left when she was 12. She wore a patch over one eye and was refer as One Eyed Charley or according to another website, cockeyed Charley or Mountain Charley.
In The Whip, author Karen Kondazian takes some liberties with the story and mixes in some fiction with the real story of Charley for a wonderful ride that actually feels very real.  Whether Charley had an accomplice at the orphanage who kills people she loves, I am unsure. If Charley loses her eye because of a horse accident, I don't know....what I can tell you is that The Whip, makes perfect sense. I can completely imagine that life as Charley Parkhurst was lonely however she was the first woman to vote! Well, it was as a man but whatever. You will love the story of Charley Parkhurst. Would love to see someone make this a movie which in my head, I have already cast Hilary Swank!
Great book!
For more information on The Whip, visit the website.
To Purchase: The Whip