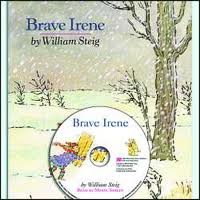 Brave Irene is Irene Bobbin, the dressmaker’s daughter. Her mother, Mrs. Bobbin, isn’t feeling so well and can’t possibly deliver the beautiful ball gown she’s made for the duchess to wear that very evening. So plucky Irene volunteers to get the gown to the palace in time, in spite of the fierce snowstorm that’s brewing – quite an errand for a little girl!

But where there’s a will, there’s a way, as Irene proves in the danger-fraught adventure that follows. She must defy the wiles of the wicket wind, her most formidable opponent, and overcome many obstacles before she completes her mission. Surely, this winning heroine will inspire every child to cheer her on.

Narrated by the iconic Meryl Streep, this Book & CD Set charms with vivid illustrations, an exciting storyline, and the perfect voice to bring it all together. Also including a read-along track, Brave Irene is the kind of book that children will grow up listening to, and then excitedly read to themselves!

Praise for Brave Irene:
“An extraordinarily eloquent story about love and courage” – The New Yorker

"With sure writing and well-composed, riveting art, Steig keeps readers with Irene every step of the long way." -- Booklist, starred review

WILLIAM STEIG (1907-2003) began drawing for The New Yorker in 1930. He published his first children’s book in 1968, and received the Caldecott Medal in 1970. His works include The Amazing Bone, Abel’s Island, Doctor De Soto, and various other Newbery Honor and Caldecott Honor books.

MERYL STREEP is one of the most celebrated and award-winning actresses in the history of film. She holds the record for most nominations for Academy Awards, and has won twice. She also garnered two Emmy Awards, Seven Golden Globes, and six Drama Desk Awards.

View more presentations from Mandie Funk
The 411:
I had never heard of Brave Irene by William Steig when I received it. We are always looking for new family friendly books to read together. What drew me in instantly was that Meryl Streep was the reader on the audio book and that there was snow on the cover. We are entering winter so this seemed like the perfect book to settle down and read with my kids.

Handsome and I headed into his room for us to read. He looked at it and asked me to read it to him. I started and he settled into my lap. Next thing I know, Goddess comes in too and settles in to listen. Then he read it out loud to me. Lastly he read it along with the audio. The last two reads were on his own. I figured we would read together and than put the book on the shelf like so many others before it.

Honestly, this was confusing, what was it about Brave Irene that made him want to read it three times in a row? I don't know. Maybe it was the pictures. Or maybe it was because he, like Irene, tries very hard and always has. Being a child in therapy since he is two, his mannerisms, scholastic abilities and personality is always scrutinized. His perseverance, like Irene's is to just keep going.

In this book, Irene's mom makes a beautiful dress for a Duchess. Unfortunately she is sick and can't get it to the Duchess, so Irene, being the good girl she is does her best to get it there. She tucks her mother in and heads out into a storm to bring it to her.

No matter how hard the wind pushes Irene she must make it there. She doesn't want to let her mother or the Duchess down. Irene is a people pleaser like most of us. We don't want to be let down. She keep going and in the end, all roads led to something spectacular. If we don't give up.

Putting aside that no mother would allow her child to venture out into a storm to bring a dress to a duchess. And, that Irene could have potentially died by falling off a cliff or freezing to death. Or, the amount of stress put on a child to trudge through the wind, snow and bitter cold without letting anyone down borders on child abuse I think the book is a wonderful read of courage, love and never giving up!

Handsome loved the book so much that he is basing his first school book collage on it! We need to pick up some construction paper today!