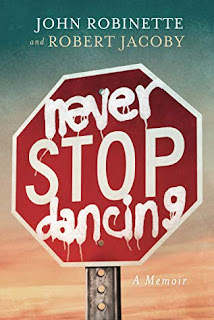 A story of grief, male friendship, and healing conversations.
“Be present,” “cherish each day,” “always say I love you.” John Robinette lived those words. Or so he thought. Then his wife, Amy, was killed instantly in a pedestrian accident.
John’s world shattered, and he began the grueling task of parenting two young boys in a house filled with vibrant, bittersweet memories. As the grief closed in around him, John’s close friend, author Robert Jacoby, saw John struggling and proposed an unusual idea: to interview him over the course of the first year after Amy’s death. Robert’s hope was to meet John directly in his experience of sorrow, explore his grief with him, and discover what lessons might be learned.
Born of a year’s worth of candid interviews, Never Stop Dancing avoids clichéd takeaways about grief and healing to chart a deeper, thornier examination of loss and regret. Robert and John are transformed through their shared experience, too, emerging strengthened and with an abiding male friendship that cuts against the grain of pop-culture trends of quick fixes and easy answers. This memoir-in-conversation provides hard-won reassurances that one can and does go on after loss.

As the daughter of a grieving father I was interested in reading this book. I was 12 when my mom died and dad grieve hard and sometimes appears to still be grieving. It was scary and so difficult to think about what he was going through after my mom passed away. This book gives me a glimpse into all that was going on in his head during those first few years.

This book is sad yet hopeful. I physically hurt as John was so candid in his recount of his first days and months without Amy. All the firsts that he and his boys had to experience without her literally brought me to tears a few times.

While reading I would take a few breaks to just sit back and think how amazing it was that Robert's idea to record sessions with John allowed him a to really sit in the moment. To really feel how this devastating loss was affecting him and his boys. Their friendship was so important to the story. Would John have been able to be so candid if he didn't know Robert. I don't know but I believe the trust allowed him to heal. Loss is never easy. Talking about someone we love and lost hurts. Robert gave John the ability to be his own therapist. Hearing yourself say things is sometimes the best medicine.

Talking to a friend and hearing myself say things to someone else that is bothering me or hurting me is when I can really work through something.  I believe everyone's grief is personal and private. No one but you can actually know how you handle it. It is your path and your path alone but having someone to talk to and in this case John having Robert and this book is the perfect dedication to his marriage, his wife and the perfect legacy for his boys. My father had started writing something when my mom passed. I was so excited to read it. Losing my mom was the hardest thing I ever had to go through. I really wanted to know about her, them, and how he felt about losing her. He never finished and doesn't know where the pages he did write are. I so wish he had. John's sons are so lucky to have this and I wish him all the best.

After the death of his wife Amy Polk, John Robinette began journaling his experience on his blog www.hole-in-the-sun, on social media, and in the online Elephant Journal. John has an M.S. in Management Science and spent the first 25 years of his career as a software engineer, IT professional, and project manager. After Amy's death, he shifted his focus towards helping people be more successful and find more joy in their careers. When he is not writing, John is an organizational development and leadership coach with the Center for Leadership and Organizational Change at the University of Maryland. He is also a principle at V-Teamwork, a company using immersive virtual game simulations to build trust and accelerate collaboration in teams.

Robert Jacoby is the author of three books: Dusk and Ember (2019, novel); There Are Reasons Noah Packed No Clothes (2012, novel); and Escaping from Reality Without Really Trying: 40 Years of High Seas Travels and Lowbrow Tales (2011, nonfiction). His poetry, fiction, and nonfiction have appeared in more than 20 literary magazines. During his career he has been an editor and writer for newspapers, healthcare magazines, health facilities, and health-related websites. In 2012 he received his Master of Information Management at the iSchool, University of Maryland, where he focused on developing the Website Governance Modeling Tool (www.website-governance.com). His most recent position was as a web governance consultant with the Food and Agriculture Organization of the United Nations in Rome, Italy. Learn more at robert-jacoby.com.
To Purchase: