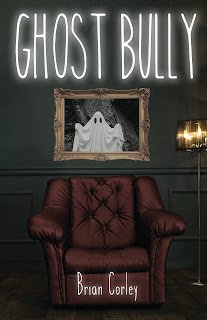 “An absurdly humorous novel of the paranormal whose enthusiasm and profundity make it truly exceptional.”
—KIRKUS REVIEWS

Austin, TX—This winter, fans of horror comedy and contemporary fantasy are in for a paranormal treat with the release of GHOST BULLY (Feb. 6, 2018) by indie author and debut novelist Brian Corley.

Taking cues from Jim Butcher (The Dresden Files), David Wong (John Dies at the End, This Book is Full of Spiders), and Grady Hendrix (My Best Friend's Exorcism, Horrorstor), Corley delivers a ghostly urban adventure with a comedic twist involving a young man who finds the success in the afterlife he yearned for while living, but ultimately finds himself pitted against an old rival, a graveyard full of foes, and an ancient evil.

Roommates can be hell.

Like when they’re late with the rent, bills, or constantly trying to kill you.

When picking out his new home, Jonah Preston never signed on to have a ghost as a roommate. He quickly learns that the previous owner, Willard Hensch, committed suicide in one of the bedrooms. It’s bad news, but Jonah is just happy to own a home and begin a new chapter in his adult life.

It ends up being an incredibly short chapter.

When Jonah wakes up dead, he knows exactly who is behind it. Willard. Freaking. Hench. The resident ghost was unhappy with its new occupants and had really been making his presence known.

For the newly deceased Jonah, that’s where his story truly begins. He befriends angels, fights demons, counsels newly transformed ghosts, and takes on a ghostly army in this hilarious paranormal thrill ride through the freakish, historic underworld of Austin, Texas.

ABOUT THE AUTHOR:
Brian Corley is based out of Austin, Texas, and enjoys looking for the strange underbelly of his beloved city. When Corley isn’t exploring the unknown, he can be found in his home office dreaming up his next comic fantasy novel. For more info, visit his website at https://brian-corley.com/, or on Twitter (https://twitter.com/nicebookbrian) and Instagram (https://www.instagram.com/nicebookbrian/) as @nicebookbrian.

I LOVED Ghost Bully. It took me longer than I wanted to read. It should have been read in a weekend but it took me a month. NOT because I didn't like it life got in the way but whenever I wasn't reading it I wanted to read it. I can't say that about a lot of books.

Jonah is our main guy and when he and a friend realize their place is haunted everything hits the fan. Their ghost is mean. JUST mean.  He friggin kills Jonah. Really?! I thought only the living could hurt us. At least that is what my daddy told me when I said I was afraid of ghosts. Willard; Jonah's ghost murder is a true bully.

The rest of the book is good versus evil. My favorite parts are when Jonah learns to live with his new life after life and the witty dialogue.

This coming of age book is fast paced with a little adventure, a little drama, a little suspense, supernatural, a bit of horror and a whole lot of funny.  Jonah, his friend Max and the rest of the Psy-kicks made this book so worth it. I loved this coming of age story with a twist. Think Scooby Doo, Little Reaper, Ghost Whisper mixed with pop culture references.

Perfect for all ages and not necessarily horror fans.