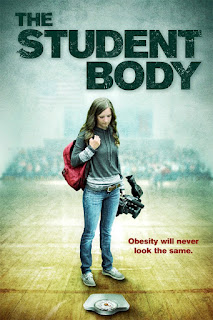 Acclaimed documentary filmmaker Michael Webber (The Elephant in the Living Room)
unleashes his politically-charged film, THE STUDENT BODY, on all major cable, satellite,
and digital platforms in North America. Winner of the 2016 Independent Spirit Award,
Webber’s ground-breaking new film tackles the heated topic of childhood obesity while shining a
critical light on the government's ill-conceived efforts to solve this global epidemic.

The Student Body follows the inspiring story of a shy high school student turned brave journalist
who seeks justice for her peers. In many states throughout the country, lawmakers have
passed controversial mandates forcing schools to perform body mass index (BMI) tests on students.
What soon followed sparked a heated national debate. Coined the “Fat Letters” by students,
notification letters were sent to kids whose body mass did not fall within a narrowly acceptable
range; essentially telling children, even as young as kindergarteners, that they are fat.

When a determined sixth-grader in Ohio voices her protest against the letters, student journalist
Bailey Webber is inspired to take up her fight. Convinced that her fellow students are being
unfairly profiled and bullied by the government, Bailey's investigation soon turns into a battle of
wills between herself and the bureaucrats who passed the law.

THE STUDENT BODY is a true underdog story of two brave girls who take a stand against
government hypocrisy while exploring the complex and controversial truths of the childhood
obesity debate.

I watched this award winning documentary late year featuring high schooler Bailey Webber. Bailey after hearing  Maddy a 6th grade student speak up at a School Board meeting how she felt after receiving a letter from her school stating she wasn't in a healthy weight range. The school apologized and all seemed well but it got Bailey thinking.

The documentary is interesting, thought provoking and even funny. I loved how Bailey professionally interviewed all these adults on how this "fat letter" could go out and and affect children's lives then pull out a scale and ask each adult to get on the scale like the kids in scale were asked. It was interesting to see some of them decline and hear her say "to be given a choice, would you like that?"

Bailey spoke to health professionals, educators, other students and spent a long time trying to get the Senator in her state.  She is definitely fearless!!!  When she finally got her Senator meeting I cheered. While he handled the interview well I was just as annoyed as Bailey during the interview. When she hands the Senator the letter and he is almost surprised that Maddy "wasn't happy to get the letter at all" I wanted to scream.  The senator was sorry Maddy reacted the way she did. He feels doctors are incompetent and parents are clueless so he is standing by the need for BMI testing in schools. URGH! Then when Bailey pulls out the scale and the Senator is visibly nervous and confused and says I will do it but I think it is only fair that you warned me you were going to do this" I literally wanted to punch him. Really?! Would my son and daughter be given notice prior to being told to get on the scale at school? I think not!

BMI is not a perfect, accurate measure of health so why are lawmakers putting so much emphasis on this number?

The last thing I would want my children to think about is a number that "the state" has decided is the "healthy range". Kids especially have enough to worry about at this awkward, uncomfortable time of their life. It killed me to hear these beautiful, healthy, thin kids talk about the letter they received telling them they are outside the "healthy range. How some went into their rooms and cried asking their mother if they were fat.

This is wonderfully done and if you take nothing away from this look at the tenacity of this young journalist. My tears flowed when at the end when Maddy and Bailey were going to hand out the "fat letters" the those who got on the scale during the interviews Maddy couldn't do it. She couldn't shame them!