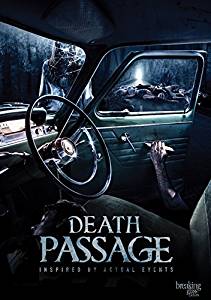 INSPIRED BY ACTUAL EVENTS! A couple of Australians introduce three American backpackers to the local legend of Lemon Tree Passage, where the ghost of a motorcyclist warns young drivers to slow down. After seeing the ghost firsthand, they uncover a malevolent force that possesses the area, and threatens to wreck havoc on the final days of their vacation. Isolated and ten thousand miles from home, the tourists find themselves caught in the clutches of an evil force much more heinous than that of local myth. DVD SPECIAL FEATURES include behind-the-scenes and blooper footage, an alternate ending, as well as cast commentary.

My husband and I are huge horror fans. We watch everything and anything. The horrible to the amazing. This for me was close to being horrible although my husband loved it.   Originally released in 2015 in Australia as Lemon Tree Passage it is now called Death Passage in the US release.

Based on an Australian Legend about the Lemon Tree Passage Road in New South Wales where speeding cars experience a paranormal phenomenon while driving at high speeds.

In this movie we have your average road trip tourists. In this case a brother and sister and a girl - friend (you know friend of the sister, interested in the brother) who meet up with two locals Gordie and Oscar at the beach. Of course it's the beach where Oscar is building a big penis in the sand. It is through these two that our road trip innocents learn of the legend. While all this is going on their is another story with some other dude who is dealing with some malevolent unseen force who is attacking him.

The legend story ends with their view of the paranormal light they see while driving but what takes over is a bad ass set on killing everyone spirit? I guess. I have no idea but people are dying.

I give it a 6 out of 10 and that is mostly because I love Urban Legend movies. My husband insists it was an 8 because he watched it and didn't get on his tablet to read Drudge.

Disclaimer: No monetary compensation was offered. I received a complimentary DVD for my honest opinion.