CALL THE MIDWIFE: SEASON ONE
The Original UK Episodes
Only Available from BBC Home Entertainment 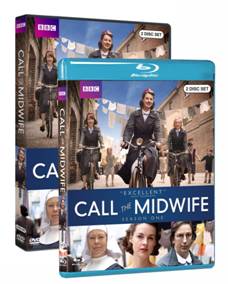 BBC Home Entertainment brings the critically acclaimed BAFTA nominated British drama Call the Midwife: Season One to Blu-ray and DVD for the first time in North America on November 6, 2012. Based on the best-selling memoirs of Jennifer Worth, Call the Midwife is a moving, intimate, funny and, above all, true-to-life look at the colorful stories of midwifery and families in East London in the 1950s. Don’t miss the chance to watch full episodes as they originally aired in the UK- only from BBC Home Entertainmen

When Jenny Lee (Jessica Raine, The Woman in Black) first arrives in Poplar, East London, she knows nothing about hardship, poverty or indeed, life itself. Attached to an order of nursing nuns at Nonnatus House, Jenny is part of a team of midwives who visit expectant mothers, providing the poorest women with the best possible care. Here, the streets teem with children and with only a single eight-bed maternity ward to serve the whole district, most deliveries take place at home. The series follows Jenny as she travels through the streets to meet her patients - including Conchita, who is on her 25th pregnancy, and Mary, a prostitute and pregnant at just 15 years old. Along the way Jenny learns to admire the families she works with, as well as the sisters and fellow midwives who witness the daily drama of life in this vibrant community on the brink of huge social change. Narrated by Oscar-winner Vanessa Redgrave (Atonement, Girl, Interrupted) as the mature Jenny, Call the Midwife provides a fascinating look at personalized health care and the courage of mothers in any condition.
Written by Heidi Thomas (Cranford, Upstairs Downstairs), the first season of Call The Midwife attracted 10.7 million viewers for its peak episode during its premiere broadcast on BBC ONE in the UK, making it the highest-rated BBC new drama launch on record. A second season has been commissioned and will air in the UK in 2013. In the US, Call The Midwife premieres on PBS starting Sunday, September 30.

If you have not watched Call the Midwife yet, you are truly missing out. The series is so well done I have to remind myself it was created NOW.  It is set in the 50s and full of drama. The midwives cater to the lower middle class in the poorest areas of London's East End with woman having babies in sometimes the most deplorable situations. The acting is incredible and while I do have my favorite characters there isn't a single actor/actress on this show that isn't wonderful. Even if you feel this is not sometimes you will enjoy, give it a try you may be very surprised.  I have laughed and cried in almost every episode. Only on episode 6 Season 1 but will continue to watch until!

BBC Worldwide is the main commercial arm and a wholly-owned subsidiary of the British Broadcasting Corporation (BBC). BBC Worldwide Americas brings together all of BBC Worldwide businesses across North and South America. The company exists to maximize the value of the BBC’s assets for the benefit of the UK license payer, and invests in public service programming in return for rights. The company has five core businesses: Channels, Content & Production, Sales & Distribution, Consumer Products and Digital.  Under these businesses fall two key brands in the U.S. – digital cable channel BBC AMERICA and BBC Worldwide Productions, the production arm responsible for the smash hit Dancing with the Stars.