Breaking The Press on DVD + Giveaway 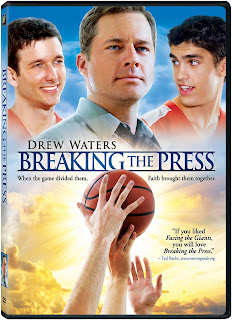 Win a Copy of Breaking the Press, Available on Sept. 20
A young man loses his way but through the power of his family’s prayers finds the path to redemption and rediscovers the love of his father in BREAKING THE PRESS, on DVD September 20 from Twentieth Century Fox Home Entertainment.
A recent recipient of the Dove Foundation’s ‘Family-Approved’ seal for all audiences over the age of twelve, this inspiring Biblical parable stars Drew Waters (“Friday Night Lights”) as Joe Conahey, a small-town high school basketball coach whose Christian faith is tested by an unsuccessful season and the intense pressure that results. The family’s two star sons—the older, diligently hardworking brother Matt (Chad Halbrook, Brotherhood) and the younger, naturally-gifted Josh (Tom Maden, “According to Jim”)—are separated when Josh selfishly transfers to a powerhouse school hundreds of miles away. His previous team’s top player, Josh finds difficulty adjusting to the big-city program, tempted as he is by girls, drugs, alcohol and stardom – and is subsequently expelled. Only through the power of prayer and forgiveness can the troubled ”Prodigal Son” make his way back into the arms of his loving father and find redemption for his family and his team.
Follow Twentieth Century Fox Home Entertainment on: Twitter @FoxHomeEnt
Giveaway: Breaking the Press on DVD


Sponsor: 20th Century Fox Home Entertainment
To Win:
Mandatory Entry.  If this is not followed, none of your extra entries will count. For your chance of winning answer the question below by Midnight, September 29, 2011.

*Become a fan of Maria's Space on Facebook (Not my personal Facebook) and post a message that you entered with a link to the giveaway on your Facebook page and leave a link to the message in the entry form (3 Entries).

*Add my main button to your side bar
;

*Open to US only.
Disclosure: I am hosting this giveaway for 20th Century Fox Home Entertainment who provided the giveaway product.
I received no monetary compensation.