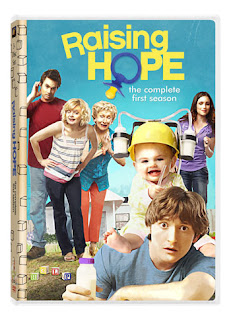 EMMY AWARD® NOMINATED
SEASON 1
The Unexpected Bundle of Joy Arrives on DVD September 20th
Life at the Chance’s will never be the same when Jimmy comes home with an unexpected gift.  Follow one ill-equipped family as they navigate through the pleasures and annoyances of raising a baby.  The Emmy Award® nominated** series, RAISING HOPE Season 1 comes to DVD on September 20th from Twentieth Century Fox Home Entertainment packed with exclusive featurettes, deleted and extended scenes, a gag reel, commentaries and the un-aired pilot never shown on television.
Created by Emmy Award® winner Greg Garcia, Raising Hope stars Lucas Neff, Martha Plimpton, Garret Dillahunt and Shannon Woodward. Cloris Leachman guest-stars as Maw Maw.
A one night stand becomes a life-long commitment when 23-year-old Jimmy Chance inadvertently impregnates a wanted felon and decides to raise Hope (aka Princess Beyonce) on his own.  Jimmy, together with his family – his Maw Maw (Cloris Leachman), his mother Virginia (Martha Plimpton), and his father Burt (Garret Dillahunt) – face play dates, amusing family photo shoots, rock star dreams, vasectomies and much more in this uproariously irreverent, critically acclaimed first season of Raising Hope.
RAISING HOPE Season 1 DVD is available on September 20th and the ARP is $29.99.
About Twentieth Century Fox Home Entertainment
Twentieth Century Fox Home Entertainment, LLC (TCFHE) is a recognized global industry leader and a subsidiary of Twentieth Century Fox Film Corporation, a News Corporation company. Representing 75 years of innovative and award-winning filmmaking from Twentieth Century Fox, TCFHE is the worldwide marketing, sales and distribution company for all Fox film and television programming, acquisitions and original productions on DVD, Blu-ray Disc Digital Copy, Video On Demand and Digital Download. The company also releases all products globally for MGM Home Entertainment. Each year TCFHE introduces hundreds of new and newly enhanced products, which it services to retail outlets from mass merchants and warehouse clubs to specialty stores and e-commerce throughout the world.
** 2011 Emmy Award® nominations include Outstanding Lead Actress in a Comedy Series for Martha Plimpton and Outstanding Guest Actress in a Comedy Series for Cloris Leachman
# # #
JOIN THE COMMUNITY
Follow along on Twitter
Giveaway: Raising Hope DVD


Sponsor: 20th Century Fox Home Entertainment
To Win:
Mandatory Entry.  If this is not followed, none of your extra entries will count. For your chance of winning tell me your favorite Raising Hope Character by Midnight, September 28, 2011.

*Become a fan of Maria's Space on Facebook (Not my personal Facebook) and post a message that you entered with a link to the giveaway on your Facebook page and leave a link to the message in the entry form (3 Entries).

*Add my main button to your side bar
;

*Open to US only.
Disclosure: I am hosting this giveaway for 20th Century Fox Home Entertainment who provided the giveaway product.
I received no monetary compensation.