How To Flirt With A Naked Werewolf

Don't you love that title?

It's title of a book by Molly Harper the author of the Nice Girls series. 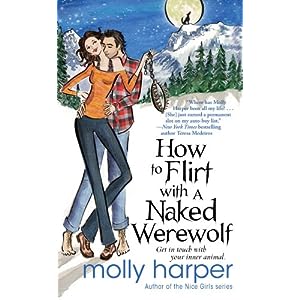 How to Flirt with a Naked Werewolf

Molly Harper wrote this book during a 2009 ice storm experience.


In Molly's Words:
An ice storm. Stranded in a strange, isolated place without power. Children with an unsettling ability to win staring contests. This is how horror movies start.
Watching the news coverage as cities across the Midwest are pelted by the much-touted historic blizzard, I m having strange sympathy pangs. In January 2009, an ice storm ripped through Kentucky, taking out power and phone lines for thousands of homes, including mine. The first night I spent camped out in my in-laws darkened living room with my two young children, I was sure this was just a temporary blip.  It was going to be a funny story we could tell the next winter. As in, Remember that night we had to sleep on an air mattress in front of Grandma s fireplace and cook on a gas grill in the garage?
By the sixth night, I was no longer amused.
Over the next week, Kentuckians were cold, cranky and progressively ill-groomed. I returned to my dark, cold house to forage for supplies one afternoon, only to find my neighbor shaving his head in his driveway. I sincerely hoped that was related to the lack of electricity and not just a personality quirk I'd never noticed before. Neighborhood block parties have been stilted and awkward since.
But I managed to channel my cabin fever, before going the full fire-ax-through-bedroom-door and elevator-full-of-blood route. I started writing. Having recently published the Nice Girls books, a vampire romance series about an undead librarian in small-town Kentucky, I d already decided that I wanted to write a werewolf story. And being isolated, in the dark, in an increasingly crowded, enclosed space, I decided to set the story in the frozen regions of Alaska.
While we waited for the power to come back on, I wrote about twenty pages of notes by candlelight.  What emerged was the story of Mo Wenstein, a woman who moves across the country to escape her intrusive hippie parents and make a life for herself in the remote town of Grundy, Alaska. Cantankerous neighbor Cooper has been giving Mo a hard time about her place in her new community since day one. But when Cooper stumbles onto her porch, naked, with a bear trap clamped around his ankle, she realizes there s more to him than a surly- though attractive- surface. A series of werewolf attacks, for which Cooper may or may not be responsible, dysfunctional werewolf clan drama, and romantic hijinks ensue.
The manuscript grew over the next few months and became HOW TO FLIRT WITH A NAKED WEREWOLF, which was released by Pocket Books on Feb. 22, wherever books are sold.  The sequel, THE ART OF SEDUCING A NAKED WEREWOLF, will follow on March 29.
So, while the encroaching claustrophobia is frustrating, make the best of your snow days. Use the milk, eggs and bread you hoarded to make French toast. Plow through the To-Be-Read pile of paperbacks on your nightstand.  Write journal entries about the sights, sounds and emotions you re experiencing as a blizzard survivor.
You never know.  You could turn this experience into your first manuscript.
What I Can Tell You:
I can only imagine the kind of book Molly could have written this year. It was a ridiculous winter.
Mo or Moon, our female lead in How to Flirt With A Naked Werewolf is a girl after my own heart. She takes chances, she is fun, witty, sweet and can kick ass and take a punch!

When Mo finds herself looking for a change after a broken engagement she packs up and heads to the wide open spaces of Grundy. Where she finds a job, makes friend's easily and eventually comes face to face with the blue-green glowing eyes of a wolf/man.

The story is quick and witty.  Mo has a way with words, especially when it comes to the male anatomy. I loved it.  Research Werewolf girlfriends on the internet? Too funny.

The cover is adorable, giving hint to how fun and clever the story is.

I am looking forward to the sequel; THE ART OF SEDUCING A NAKED WEREWOLF, due out next month.

If you like paranormal romances, this is a great book.

Even in Grundy, Alaska, it’s unusual to find a naked guy with a bear trap clamped to his ankle on your porch. But when said guy turns into a wolf, recent southern transplant Mo Wenstein has no difficulty identifying the problem. Her surly neighbor Cooper Graham—who has been openly critical of Mo’s ability to adapt to life in Alaska—has trouble of his own. Werewolf trouble.

For Cooper, an Alpha in self-imposed exile from his dysfunctional pack, it’s love at first sniff when it comes to Mo. But Cooper has an even more pressing concern on his mind. Several people around Grundy have been the victims of wolf attacks, and since Cooper has no memory of what he gets up to while in werewolf form, he’s worried that he might be the violent canine in question.

If a wolf cries wolf, it makes sense to listen, yet Mo is convinced that Cooper is not the culprit. Except if he’s not responsible, then who is? And when a werewolf falls head over haunches in love with you, what are you supposed to do anyway? The rules of dating just got a whole lot more complicated. . . .

Disclosure: I received a complimentary copy from Simon and Schuster for my honest opinion.