When Calls The Heart Forever In My Heart 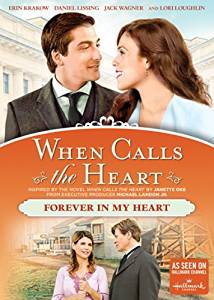 While Jack attempts to help a young settler couple reconcile their differences, Elizabeth tries to inspire her students, particularly Cody's sister, Becky, who has returned to Hope Valley in a wheelchair. Everyone is surprised when Carolyn Connors, Cody and Becky's long-lost, wealthy aunt, arrives to whisk them out of Abigail's care and raise them on her own. Meanwhile, Henry is arrested for sabotaging Lee's sawmill, and Lee's romantic intentions for Rosemary may also be sabotaged when a producer casts Rosemary in his upcoming film!

What I love most about this show is how family friendly it is. I never have to change the channel because an inappropriate scene surprised me and the kids are awake. This is a wholesome show that everyone in your family can watch.

There are so many characters but our main characters are still favorites. This time our favorite teacher introduces her students to the idea of a Science Fair. She shows them a volcano that gets even the ones who aren't interested really excited about entering and the possibility of a scholarship.  She also has to contend with her own thoughts as Jack's old love Faith who has called off her engagement and has decided to stay and run an infirmary.

Cody and his sister are finally reunited and when Abigail tosses the word adoption on the table everyone is very excited to know they will always be together but could a "relative" who suddenly surfaces change all that?

This is a wonderful show and I only just touched on some of the story lines of this wonderful family show. Binge watch and get caught up now.

Disclaimer: I received a complimentary product for my honest opinion. My reviews are 100% honest and true based on my personal opinion not on a company’s description or request. No monetary compensation was received. :