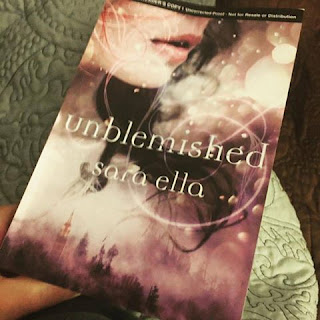 Instagram and Snapchat allow today’s teens to manipulate and ‘improve’ their own images in countless ways, from airbrushing their skin to donning masks, bunny ears, and more. In her hotly anticipated debut novel, Unblemished [Thomas Nelson / HarperCollins, October 11th 2016], author Sara Ella gives young adult readers a story in which true beauty from within is unapologetically celebrated – and where so-called “flaws” can be the source of unimaginable power and strength.

Unblemished centers on a teenage girl named Eliyana, who can’t bear the sight of her own reflection. With a hideous birthmark covering half her face, she just hopes to graduate high school unscathed. That is, until Joshua suddenly enters her life and changes her perspective. No one, aside from her mother, has ever treated her like he does: normal. Because of Joshua, Eliyana finally begins to believe she could be loved. Maybe even beautiful.

Empowering, emotional and action-packed, Unblemished introduces Ella as a powerful and important new voice in the YA fantasy arena. Featuring a protagonist who, in Ella’s words, “is not your typical YA fantasy heroine,” at the heart of Unblemished are timely and ever-important messages of self-worth, inner beauty and remembering and embracing what’s real – which doesn’t include Photoshop, filtering, or letting your “flaws” get the best of you.

A not-to-be-missed addition to the contemporary YA fantasy landscape, Unblemished has already begun capturing the hearts of early reviewers — and will arrive in bookstores everywhere just in time for the 2016 holiday season!

Eliyana has always recoiled from her own reflection in the mirror. But what if that were only one Reflection—one world? What if another world existed where her blemish could become her strength?

Eliyana is used to the shadows. With a hideous birthmark covering half her face, she just hopes to graduate high school unscathed. That is, until Joshua hops a fence and changes her perspective. No one, aside from her mother, has ever treated her as normal. Maybe even beautiful. Because of Joshua, Eliyana finally begins to believe she could be loved.

But one night her mother doesn’t come home, and that’s when everything gets weird.

Now Joshua is her new, and rather reluctant, legal Guardian. Add a hooded stalker and a Central Park battle to the mix and you’ve gone from weird to otherworldly.

Eliyana soon finds herself in a world much larger and more complicated than she’s ever known. A world enslaved by a powerful and vile man. And Eliyana holds the answer to defeating him. How can an ordinary girl, a blemished girl, become a savior when she can’t even save herself?

Personally I liked the book immediately but found myself disinterested in the first few chapters. Not sure why that is though because when I was reading it I enjoyed it but it wasn't one of those books that called to me when I wasn't reading it. What I DID love about this book was all the Pop Culture  and music references. I found it fun, modern and kept me very interested and sometimes laughing at the inclusion.

Unblemished is a story inside of a story and I believe many will love the many different realms Eliyana encounters on your journey to truth.


Fan Made Book Trailer - SO GOOD
To Purchase