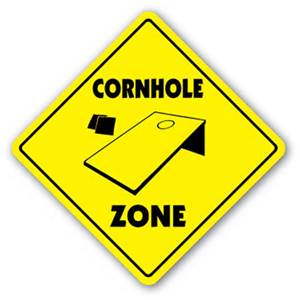 Cornhole is a popular American tossing game that is believed to have originated on the West side of Cincinnati. Since its inception, it has grown to become a popular sport across the United States. While simply constructed, the game still provides a fun, wholesome challenge, and has now become an official sport followed by ESPN.

While called by a variety of names, such as Baggo or Bean Bag Toss, the official Cornhole game has standardized rules. Cornhole matches involve from 2 to 4 people, and are played with two platforms and two sets of bags.

Each set has 4 bags filled with dried corn kernels,that are distinguishable by color. Official Cornhole rules require that bags measure 6" x 6", and that they be double seamed. Each bag should weigh no more than 16 ounces, although this may vary by 1 or 2 ounces, according to the fabric used to construct it.

Two 2' x 4' wooden platforms are placed opposite one another at an angle. A 9" hole appears on the far end of each platform. The top edge of each playing surface should be 1' above the ground. The bottom edge should be from 3" to 4" above ground.

Each pitcher is required to maintain constant contact with a designated pitcher's box while holding and releasing the corn bag. His or her opponent is required to stand behind the platform at least 2' behind the person who is pitching
Scoring

Cornhole matches are played in frames or innings. In order for a player to gain points,
the bags must be tossed into the 9" hole or land on the board itself. It can be knocked into the hole by another bag, slid into the hole or tossed directly into it. When a player achieves the ultimate goal of passing the bag through the hole, he or she attains 3 points. When a bag lands on the board and remains there at the end of the frame, the player receives a single point. A toss is worth 2 points if it lands on the board and hangs over the hole without falling through it. The match is played until the first team or individual player reaches 21 points at the end of a frame.

Cornhole can be played one on one, or in doubles, where each team consists of two opponents. During this version of the game, one person on each team pitches from one platform and the other pitches from the other.