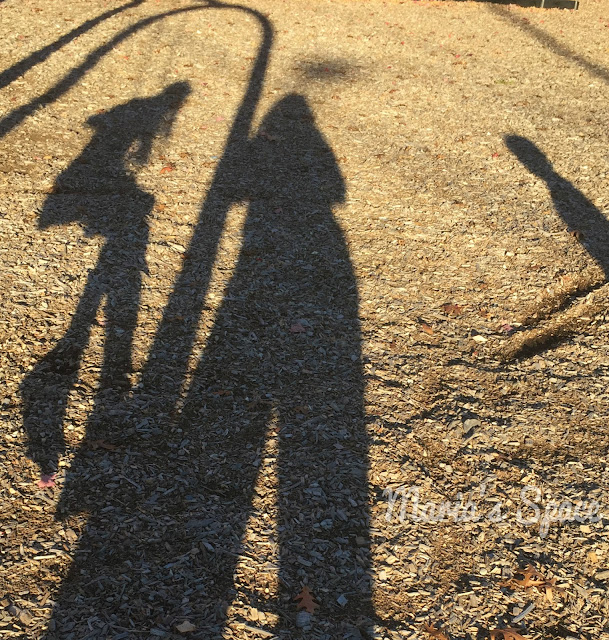 Today with school closed for a Superintendent thingy the kids and I headed out for the day, spent some time on the trampoline then headed out again for the park. There we ran into people we know.  One in Handsome's class and one a grade below Goddess.

Handsome is NOT friends with this kid. As someone on the spectrum Handsome has yet to make actual friends. Goddess makes them wherever she goes and knows how to chat with people she kind of knows from school.

As a hover mom I usually hang close and now with smartphones can spend time in Facebook land or read on the Kindle app while the kids hang. This time because Goddess was hanging with this boy from my son's class I listened instead of actually reading.

Handsome was doing the walk around the perimeter of the park as he usually does, in his own world. Goddess and the other kids were on the slide top talking. I overheard this boy proceed to talk about curse words with the girls. I heard them saying they know them and the girl says she knows what most mean but not the F word. She knows what the F word is but not what it means. My daughter said me either. Thankfully the boy didn't fill them in. I heard him tell my daughter and this other girl about my son and how he gets yelled at in class. How he yelled once and said a curse word (damn) in class and how he was sent to the principal. I heard Goddess say, "I don't believe that." I heard him say lets play a trick on Handsome and Goddess said, "if I do that I will get in trouble." I thought Great she knows better. She knows it is NOT OK to play tricks on her brother.

Then the boy said, "Come on I know how to get him." She followed. I was shocked! She followed them to do something she didn't want to do, knew she would get in trouble for BUT did it anyway.

I started walking at the same time he was headed over wanting to make sure he would be OK.

They were out of sight. Whatever happened was quick and my son was walking back toward me asking if I wanted to leave. I said, "yeah guys I have to vacuum and clean the bathroom." He was bummed.

Walking to the car I asked him what was going on in the corner. He said, I don't know. I asked Goddess she said, "yes you do Brandi said Hi." She was hiding in the corner and I don't know I guess the boy had a whole scenario but the girls didn't understand or maybe they thought he would be scared when she popped out.   It wasn't a BIG deal BUT this was my opportunity to tell Goddess that ganging up on her brother with a bunch of kids was not OK.

She sat with her head in her hands as I calmly explained that I was disappointed. That her picking the side of some idiot kids over her brother was NOT OK in my book. That they kids were nobody to us and that she was never to work against her family because some kids are telling you too.  I mentioned that I thought she was tougher and smarter then that since I knew she had said she shouldn't and that she didn't want to get in trouble. She was shocked I had overheard and I reminded her that MOMMY hears everything.

I finally got in the truck after she said, "I'm sorry" and explained that THEY MADE HER.  I calmly explained that this wasn't that big of a deal and they can't make you do anything you don't want to do and you shouldn't do something you know is wrong. I explained that the voice in your head telling you not to is the one she should listen to. That voice is important to you doing the right thing. That if you think something is wrong and know in your heart it is wrong then go with your GUT, With YOUR VOICE, with YOUR INTUITION.  Again, I explained that this was not a big deal but that I tells me that she is NOT ready to be trusted. That this lesson isn't for now. It is for when you are 15, 17, 22. It is for when your friends are saying, smoke this, drink this, take this. It is for then.

Remember to always trust your voice. It is your heart! It is Me! It is you telling you NOT to do something. It is saying Danger. Stop before it is too late.

This may seem like an extreme conversation for something like playing a trick on her brother that turned out to be innocent, juvenielle and harmless but maybe the next time it won't be and I need her to think and stand firm. I need her to be stronger. Head strong, strong willed and not bend to peer pressure. It is NOT worth it and someone could get hurt.