THE LONG LOST EPISODES FROM THE FIRST FIVE SEASONS OF THE CAROL BURNETT SHOW -- NOT SEEN FOR OVER 40 YEARS - ARE AVAILABLE FOR GIFT GIVING IN MULTIPLE CONFIGURATIONS! 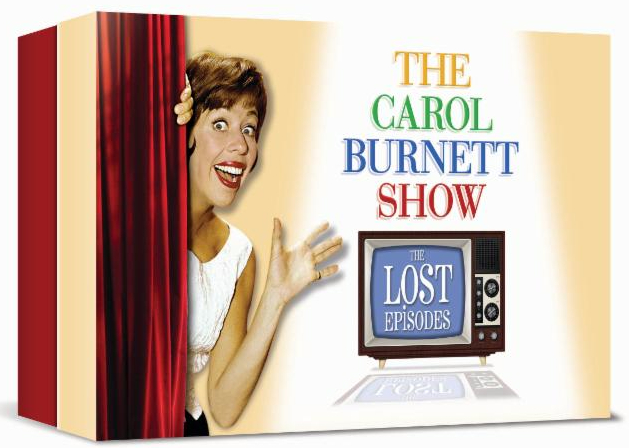 Every legend has a beginning.  And this past September, Time Life released the very first steps of a TV icon with THE CAROL BURNETT SHOW: THE LOST EPISODES.  Featuring original broadcast episodes from Seasons 1-5 (1967-1972) not seen since their original airing more than forty years ago and hand-picked by Carol herself, Time Life has a configuration for every fan -- whether a die-hard, Tarzan-yelling, ear-tugger or a newbie, discovering the incredible talents of Burnett for the very first time.


Aside from the 6-disc retail set, which features 16 magical episodes and nearly 5 hours of bonus programming including a backstage tour of CBS Studio 33, 13 exclusive new interviews with Alan Alda, Julie Andrews, Bill Hader, Queen Latifah, Don Rickles and others, bonus sketches and never-before-seen bloopers & outtakes, Time Life has also released two exclusive configurations.  THE ULTIMATE COLLECTION includes 22 DVDs, over 20 hours of specially-created bonus programming, a collectible guest book and more.  And, THE VIP EDITION features all that, plus a hand-signed, personalized greeting on the cover of the guest book from Carol.  Each VIP EDITION will be numbered and arrive with a Certificate of Authenticity.

TIME Magazine named THE CAROL BURNETT SHOW one of the "100 Best Television Shows of all Time".  This holiday season, perhaps it's time to discover why.

I spent the last two weekends watching one of my childhood favorite shows; The Carol Burnett Show on DVD. As soon as it arrive I text my sister a photo saying I wish she lived closer so we could watch together.  We spent the next hours talking about our favorite episodes and I was amazed at how many we remembered as we started talking.

The Carol Burnett Show The Lost Episodes was a wonderful collaboration of  some of the funniest skit work done by actors that obviously enjoyed being with each other.

Carol Burnett, Harvey Korman, Vicki Lawrence, Tim Conway, Kyle Wagner and a slew of famous iconic actors and singers appeared on the show week after week including Jim Nabors, Don Rickles, Bing Crosby and more would sing in the musical showcase or act with Carol and the Gang.

Each show started with Carol coming out in her stunning outfits for the times, speak to the audience and answer questions. It seemed like anything was on the table, she answered it all. Her talent goes well beyond comedic acting, she could sing, dance and her ability to do any character imaginable had my family and I sitting around the one TV in the house watching and laughing through every episode.

Some of my favorites are Carol as Shirley Cupcake running for office and Roger and Carol the reality piece where Carol and her husband raised her little sister in her early years of marriage AND any time Tim Conway was on. He managed to always crack the rest of the cast up. We always loved that they seemed to be laughing as hard as we were throughout their skits.

This is the perfect gift for any TV fan! Carol Burnett and her gang were a part of my childhood and I am so happy to be watching them again.