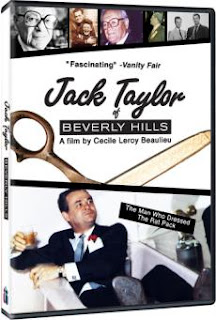 A good suit has many lives, and if a suit could talk it would tell the story of Jack Taylor.
Take a nostalgic and intimate look at an American icon and a dying breed in JACK TAYLOR OF BEVERLY HILLS. For more than sixty years Jack Taylor has dressed the stars, including Cary Grant, Dean Martin, Sid Caesar, Frank Sinatra and even Elvis Presley. Indeed, it was Taylor's threads that established the fashion trends of the Rat Pack. Jack Taylor's custom-made suits have stood the test of time, an always fashionable and enduring symbol of status.

This documentary captures precious hours recently spent in Jack's dynamic presence. Through candid interview footage and evocative vintage video and stills, the film documents the colorful life of Jack Taylor, who in his nineties still works every day with as much precision, wit and panache as ever. He is the consummate craftsman, measuring, custom-fitting and perfecting suits made out of the finest material -- suits that have brought out the best in men's fashion.

JACK TAYLOR OF BEVERLY HILLS is more than the story of a fashion pioneer; it is a bittersweet portrayal of old Hollywood, detailing the demise not only of custom tailoring, but of an era.

Jack Taylor has dressed some of the biggest names in Hollywood like Cary Grant, Frank Sinatra. In fact, it is his style that become the fashion trend for the Rat Pack like Sammy, Dean and the rest. He is still working and dressing young Hollywood like actor Jason Schwartzman.

I love the celebrities like Monty Hall who appear in the documentary.

Jack shows his costumer cards featuring some of Hollywood's greats featuring their color and fabric swatches  and candidly tells stories about Charles Bronson having Jack Taylor clothes in his contract. Burt Reynolds being a bad payer.

Jack was even big before he moved to the West Coast. His wife talks about how Jack was making clothes for Danny Thomas, Glen Mills, Tommy Dorsey and more back in NY.

There are tons of star studded photos, and stories. It  is very interesting to see old Hollywood through the eyes of the man who made them look good.

Jack is definitely not humble he states he decided what everyone would wear. In fact he would go through their closets and numbers their clothes so they knew what to wear.

Who knew a documentary on men's clothes could be so interesting?