Where Hope Grows - A Feel Good Movie Review About Faith, Courage and Friendship 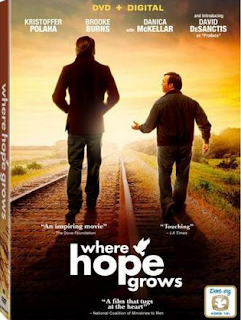 Experience the power of faith, courage and friendship in the moving drama Where Hope Grows, now on Digital HD, Blu-ray™ (plus Digital HD), DVD (plus Digital) and On Demand from Lionsgate Home Entertainment. Receiving 5 out of 5 Doves from The Dove Foundation, Where Hope Grows is an uplifting tale of an ex-baseball player who finds salvation when he befriends a grocery-store clerk who has Down syndrome. Theatrically released in 2015, and written and directed by Chris Dowling (Rock Slyde), the heartwarming film features touching performances from a stellar cast including Kristoffer Polaha (TV’s “Ringer,” TV’s “Life Unexpected”), Billy Zabka (The Karate Kid), Brooke Burns (Shallow Hal, TV’s “Baywatch”), Kerr Smith (TV’s “The Fosters,” TV’s “Dawson’s Creek”), Michael Grant (TV’s “The Secret Life of the American Teenager”), Alan Powell (The Song) with Danica McKellar (TV’s “The Wonder Years”) and introducing David DeSanctis as “Produce.”

Calvin Campbell (Polaha), a former pro baseball player with a self-destructive streak, has his faith in God restored when he meets Produce (DeSanctis), an inspirational man with Down syndrome. As their friendship develops, Calvin is reminded that hope grows in the most unlikely places.

The Where Hope Grows home entertainment bonus material includes deleted scenes, plus two featurettes that look at the casting of “Produce” and a discussion of the “R-word,” along with an audio commentary from writer/director Chris Dowling and actor David DeSanctis.  The Blu-ray and DVD will be available for the suggested retail price of $24.99 and $19.98, respectively.

With all honesty I truly loved this movie. It was everything that a feel good movie is supposed to be. The recipe has been done for ages.

Guy down on his luck needs that one person to make a ripple effect in his life that changes the current course and makes him a better person.

In Where Hope Grows our down on his luck guy Calvin is a single dad with a teenage daughter. I don't think we ever find out why he is a single dad. Did he get custody? Did his wife die?

He has checked out of the game because his baseball career was sidetracked so he isn't being the father his teenage daughter needs right now. She is spreading her wings and giving up on him. Her daddy issues are sending her into the arms of a creepy, older boy who is demanding too much of her.

One day while shopping our Calvin meets his life ripple effect guy Produce a guy with Down's who works in the Produce Department of a store. Produce loves giving hugs and putting smiles on shoppers faces.  Calvin and Produce eventually become unlikely friends in the sweetest way.  They are good for each other. With some bumps along the way, these two guys start living their best life.

The story line is great. The acting wonder. You will see a lot of familiar faces.

This movie teaches acceptance and compassion of others and that it is never too late to turn your life around.

The teenage daughter played by McKaley Miller stared in Scream Queens and Hart of Dixie.
Our lead guy Kristoffer Polaha was in Life Unexpected and Mad Men
Kerri Smith has a small role but you know him from Dawson Creek and he is still fine even though a silver fox.
Danica McKeller is from The Wonder Years
Brooke Burns is from Melrose Place and Bay Watch...she looks fabulous BTW
AND David SeSanctis who plays Produce is completely lovable in his film debut. This tiny powerhouse has the chops to hold his own with these sitcom titans.

I loved everything about this movie and the ending had me sitting up in my chair praying for all to be well!!!

Most of the movie is family friendly however there are three scenes where a boy is pressuring a girl for more and eventually tries to rape her.   Use caution if watching with your children.