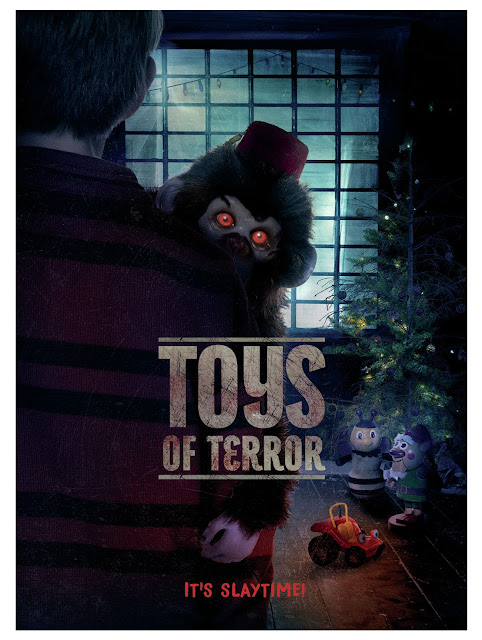 David and Hannah Cashman have promised their family a fun Christmas getaway, but when they arrive at a grand, old house in the snowy woods of Washington and are greeted by familiar construction foreman, the kids realize their parent’s plan to make it a working vacation; renovating the place in the hopes of flipping it. Alicia, the eldest, is annoyed but the younger kids are soon distracted when, wandering through the creepy mansion, they find a stash of old toys in an abandoned playroom and take to them instantly. Before long, they seem to be inseparable from their new playthings, much to the consternation of their nanny Rose who, along with Alicia, senses that something in the house is not quite right. As stranger and stranger things start to happen, Rose and Alicia have a hunch that there may be more to the history of the old house than the Cashman’s are letting on.  Can the family escape with their lives – or will they stay forever in the crumbling house, never to celebrate another Christmas again?

“Toys of Terror will grip you from beginning to end with its creepily life-like toys and chilling plot twists,” said Mary Ellen Thomas SVP Originals, Animation & Family at WBHE. “Get into the holiday spirit and be prepared to be horrified the same time with this all-new horror classic.”

·       A Terrifying Weekend: Making of Toys of Terror

I base all movie reviews I watch with my husband on whether or not he takes his eyes off his laptop and while watching Toys Of Terror he totally watched this movie never getting to his homework and that says a lot. Usually the TV is on as background noise while he does his homework and he has to get it done! He works all day and goes to college at night. He does not have time to watch TV but I received a copy and was dying to watch Toys of Terror.

OK...let's jump in. Toys of Terror wasn't award winning, there was a ton of loop holes for me. A blended family are going away for Christmas to a home they bought so they can flip it. It is literally a mansion and so much better then the house they are currently living in so flip the other house and move into this one. We also never see them working on flipping anything and only know this because when they arrive at the house. all the family including the nanny, are standing in a row staring at the house while the camera takes a long shot of their profiles as they discuss the house and we learn more.

The house is huge and their is a caretaker staying their as well. The mom knows this home was once a children's hospital and her step daughter and nanny research the home to find out the history.

The smaller children find a chest of old toys which eventually come to life and have an agenda of their own. A fuzzy bee, a flying dragon with a rider, a car, a monkey, a mask and more.  The toys seem to be changing the children or are they? t

There was so much to find hocky about the movie.

The flying bee who suffocates the caretaker

The scene where the kids wake for Christmas and the toys teach them that crappy presents like clothing should be thrown in the fireplace.

The scene where the toys try to toss the nanny of the railing.

The little sock the nanny find and the bassinette. This scene made no sense to me. Apparently the nanny lost a baby. Is the sock to remind her? Is her baby there? Is someone trying to drive her mad? I have no idea.  There were so many moments I was scratching my head but in the end people die and one is left there to take care of the kids forever with them reading to the children of the hospital in the lit living room while the camera pulls out past the outside of the home, the living room light goes out.

All in all I love this movie and would totally watch it again and plan on it!

Toys of Terror is available to own in high definition and standard definition from select digital retailers including Amazon, the Apple TV app, FandangoNOW, PlayStation, Vudu, Xbox and others. Toys of Terror is also available digitally on Video On Demand services from cable and satellite providers, and on select gaming consoles.

Movies Anywhere is a digital movie platform that enables movie fans to discover, access, and watch their favorite digital movies in one place. Movies Anywhere brings together a library of nearly 7,500 digital movies from Sony Pictures, Twentieth Century Fox Film, The Walt Disney Studios (including Disney, Pixar, Marvel Studios and Lucasfilm), Universal Pictures (including DreamWorks and Illumination Entertainment) and Warner Bros., and will continue to expand the consumer experience as more content providers, digital retailers and platforms are added. By connecting participating digital retailers that include Amazon Prime Video, the Apple TV app, FandangoNOW, Google Play, and Vudu, movie fans can now bring together their digital movie collections (whether purchased or redeemed) in one place and enjoy them from the comfort of their living rooms, and across multiple devices and platforms, including Amazon Fire devices; Android devices and Android TV; Apple TV, iPhone, iPad and iPod touch; Chromecast; Roku® devices and popular browsers. Movie fans can also redeem digital codes found in eligible Blu-ray and DVD disc packages from participating studios and enjoy them through Movies Anywhere. Movies Anywhere – your movies, together at last.

SYFY is a global, multiplatform media brand that gives science fiction fans of all kinds a universe to call home. Celebrating the genre in all its forms, SYFY super-serves passionate fans with scripted original science fiction, fantasy, paranormal and superhero programming, along with late night animation, fan-focused franchises and live event coverage. The brand is powered by SYFY WIRE (www.syfy.com), the premier editorial brand for fans of sci-fi, fantasy and horror. SYFY is part of NBCUniversal, one of the world's leading media and entertainment companies. NBCUniversal is a subsidiary of Comcast Corporation.