If I Never Met You by Mhairi McFarlane - If faking love is this easy... how do you know when it’s real? 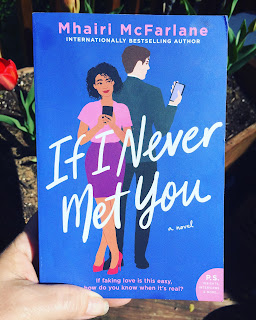 When her partner of over a decade suddenly ends things, Laurie is left reeling—not only because they work at the same law firm and she has to see him every day. Her once perfect life is in shambles and the thought of dating again in the age of Tinder is nothing short of horrifying. When news of her ex’s pregnant girlfriend hits the office grapevine, taking the humiliation lying down is not an option. Then a chance encounter in a broken-down elevator with the office playboy opens up a new possibility.Jamie Carter doesn’t believe in love, but he needs a respectable, steady girlfriend to impress their bosses. Laurie wants a hot new man to give the rumor mill something else to talk about. It’s the perfect proposition: a fauxmance played out on social media, with strategically staged photographs and a specific end date in mind. With the plan hatched, Laurie and Jamie begin to flaunt their new couple status, to the astonishment—and jealousy—of their friends and colleagues. But there’s a fine line between pretending to be in love and actually falling for your charming, handsome fake boyfriend..
The 411:
Interestingly enough I started reading this book at exactly the same time I started watching DollFace on Hulu. While they are not the same at all they start out roughly the same. A woman's significant other suddenly leaves her for another woman PERIOD! That is where the similarities end but I suggest you read this and also watch DollFace. I loved it and cannot wait for Season 2.
Back to the Book
Laurie has wanted a baby forever and her boyfriend Dan doesn't want kids until he suddenly leaves her for a pregnant girlfriend although this lying cheat leaves the fact that he has moved on a secret leaving Laurie to wonder what happened.    Breakups are hard but this one is even more complicated because Laurie and her ex work together. She hears about his girlfriend being pregnant through office gossip and concocts a scheme with the office playboy Jamie.
Laurie is liked and respected and Jamie would like to move up the ladder and Dan will be so jealous if he hears Laurie has moved on with Jamie no less so it is clearly a win-win for them both.
Things couldn't go smoother until Laurie and Jamie start to see each other as more than just a scheme partner but are the both on the same page?
I loved this book. It was a fun read and while I have read this story a million ways this one was different. It was witty, sarcastic and well crafted. Great pace with great characters. Not a single one annoyed me which is something I can't always say.
Perfect read for losing yourself for a little while.
To Order: