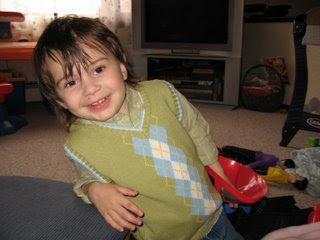 So the kid that is in speech therapy and special instruction according to an evaluation by professionals is currently…
Well wait..let me catch you up…
Handsome will be 3 in May and last summer while talking to some people; they told me (because they know everything) that I should have him evaluated because there were some things that should be “red flags” to me that could indicate a potential learning disability. I thought they were no-it-all kooks and went home. After sitting on it for a day I thought that perhaps these well-meaning folks were onto something. Maybe as his mom I wasn’t seeing any problems because to me he is absolutely perfect. But…what if I ended up being a reason that Jesse didn’t live up to his full potential. I decided to have him evaluation against my better judgement. So three strangers come to my home last June and try to get Handsome to do tricks for them. He knew his alphabet, knew his body parts, knew his shapes and colors but refused to perform with these strangers. I was told upon a 20 minute evaluation that he would be eligible for speech and special instruction. We started Special Instruction with a women who basically didn’t know what to do with Handsome and would come and talk to me most of the time. I was about to change her when she actually pulled herself out and gave me someone in her place. I adore the person who does Special Instruction with Handsome. It is a glorified 45 minute playdate but he and I really look forward to it.


Handsome speech instruction started last October and really knows what Handsome likes and doesn’t like. I have seen Handsome’s speech progress over the last few months but I cannot contribute this to his speech therapist. I think he would have been doing this anyway.
Before these sessions began Handsome knew all his letter, his shapes, and his colors with words and jargon here and there. Like he could not say milk it was “ilk” but hey most kids have some pronouncation problems when they are hello like 2 years old. Give me a break..
He was re-evaluation by the Board of Education because upon turning 3 he would be considered a pre-schooler and would not be eligible for Early Intervention past August 31st of this year. I sat with 11 strangers two weeks ago who by looking at a 30 page report (information gathered from 20 minute interviews with some more strangers at an evaluation facility) on Handsome were about to tell me what Handsome would benefit from. The night before the meeting I sat down with the report and made notes in the margin where there was a change, a discrepancy or where I felt something was taken out of context.
I walked into the meeting said “hello” and before taking my coat off handed the group 8 pictures of my son taken this month. I told them “This is my son, you can pass the pictures around. You only know him from this report and I want you to see the person you are about to talk about.” They were pleasant and told me that they wished more parents brought pictures. After listening to them discuss my son, and that they thought he would benefit from 5 days a week at a facility and 3 hours a day with speech, special instruction and occupational therapy. They mentioned a school bus that would pick up my son and bring him home afterwards. I had done my homework and knew all about the program and the bus.
I told them that I was not ready to place Handsome in a program yet and that I would definitely not be putting him on a bus to go 45 minutes from home. They talked about the safety of the bus and the program. I told them that I had all the information I needed at this time but that as Handsome’s only advocate in the meeting. I would like the extension that would take his current services to August 31st and then I would consider the program after that time. I told them that since the report was written 2 months prior there were so many changes and went over a few with them. I also discussed some things that I thought were out of context or discrepancies (and there were quite a few).
Basically the way it was left was that we would keep the current services Handsome receives until August 31st. After that I will either end services or meet with the group again to discuss what I want for Handsome. Basically I think that none of this can hurt him but I will not be putting him on a bus, or into a 5 day program. He is only going to be 3 and God damn it he is doing wonderful and a full day of school will be starting soon enough.
So the kid who according to the Board of Education needs services currently..Knows his alphabet on sight, knows his shapes, knows his colors, says about 350 words (some more clearly than others but this gets better everyday). He says “please” when he wants something, “thank you” when he is given something and bless you when someone sneezes. He says “I love you” and “a hug” when he wants a hug.
He also spells:Blue, X-ray, Read, Book and Home on his own. He draws lines, circles and faces. Ok the faces are cyclops but really the only thing missing is the other eye. Hell they even have hair and a hat!
He is not an angel, he has some occassional tantrums like most kids his age but I think he is perfect just the way he is..
I can’t wait until August when I can go back to the BOE and tell them that I have decided against continuing his services. I can hope!