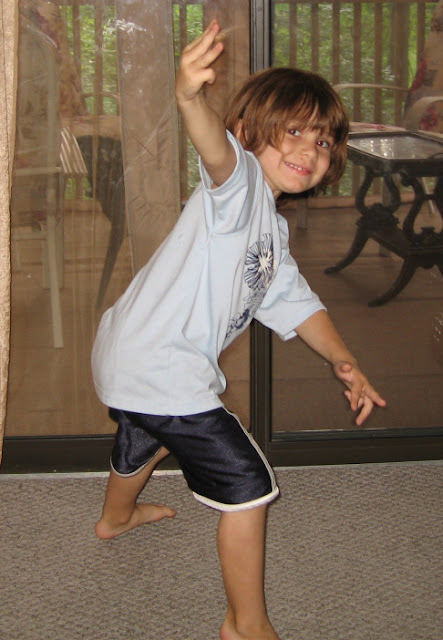 The weather has been incredible. I love this time of year it makes me feel so alive. The air is crisp and the colors are starting to turn on the trees. I have spent the past 4 days outside just enjoying being outside.
Handsome starts Pre-K on Monday. He is so excited so it is hard to be sad about it. He spent the summer asking “I have school tomorrow?” I can only hope this enthusiasm for his education continues well into into school career.
He has fallen in love with the movie “Zathura” from 2006 and walks around the house ALL DAY, acting out scenes from the movie.
It is a cute movie about 2 brothers who end up in outspace fighting off aliens space ships and rescueing an abandoned astraunaut. It’s a your basic story of two siblings who bicker and are competive all the time but they have to work their their relationship in order to work together to get themselves and their house back home.
Through most of the movie the actors are suspended by wires as the house supposedly flies through space or they are running from a robot set to destroy them. Handsome hangs from everything trying to have his feet fly out behind him while he shouts, ‘Walter, help” or ‘Danny!” It’s so funny to see him take such an interest in a movie that is not Wiggles, Barney or Blue’s Clues. The only negative thing in the movie is when the younger brother calls his brother a “dick.” Lovely, but so far, Handsome hasn’t noticed and the one time he did copy the dialogue he said, “you’re a bic” fine with me. I won’t be correcting that anytime soon.
For some reason he has also taken to posing for my camera in weird legs spread, hands in the air, and wide mouth. I still haven’t figured that one out yet.
Next movie up…Goonies. I can’t wait to hear “Goonies never say die” and “Everything. OK! I’ll talk! In third grade, I cheated on my history exam. In fourth grade, I stole my uncle Max’s toupee and I glued it on my face when I was Moses in my Hebrew School play. In fifth grade, I knocked my sister Edie down the stairs and I blamed it on the dog… When my mom sent me to the summer camp for fat kids and then they served lunch I got nuts and I pigged out and they kicked me out… But the worst thing I ever done – I mixed a pot of fake puke at home and then I went to this movie theater, hid the puke in my jacket, climbed up to the balcony and then, t-t-then, I made a noise like this: hua-hua-hua-huaaaaaaa – and then I dumped it over the side, all over the people in the audience. And then, this was horrible, all the people started getting sick and throwing up all over each other. I never felt so bad in my entire life.”