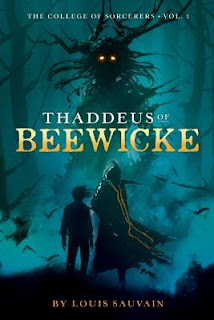 In this debut high fantasy epic, author Louis Sauvain creates an ensemble of unique characters who endure precarious situations on the road to the Collegium Sorcerorum, the College of Sorcerers. This first in three separate trilogies is set in the Dark Ages where Silvestrus of Somerset, Master Sorcerer, seeks apprentices with latent gifts. His first protege' and the protagonist is Thaddeus, who at age 14 shows great potential. They set out for the College in a cart pulled by the sentient mule, Asullus. As they travel, the mule befriends the young boy. Along the way, they are joined by two others -- Anders of Brightfield Manor, a scholar and Rolland of Fountaindale, a thief.
"To be a sorcerer," enumerates Silvestrus, "one must have inborn talent and the strength of Belief. Any Sorcerer's desire can take shape in the present world exercised by sheer will alone. However," he adds with caution, "with each use of Sorcery a Sorcerer's life span is shortened by an unknowable amount."
Young men discovering their talents of sorcery see themselves as invincible, a shortened lifespan seems little sacrifice. Then Silvestrus adds one last requirement -- before you can command the use of Sorcery, a selected youth must first be joined in true love. This act of oneness must transcend youthful urges or one's soul can be lost forever.
In this first volume of the College of Sorcerers Series, on the night of the celebration of the solstice, Thaddeus beholds a vision of the formation of the Earth in the 'Cauldron of Creation.' He learns that Demons are responsible for this violent act, which accounts for the imperfections found in their invention. He also learns these same Demons lie trapped inside the Earth's crust ever striving to break free so they may devour their sole rival for power over the Earth -- Mankind. It becomes clear that these new apprentices are to fulfill a prophecy set in motion long before their lives began. As they reach the College of Sorcery Thaddeus knows that he is home.

WOW! I really loved this book even though I do not love books that have complicated names. Thaddeus was the easiest for me and everything else was glanced over. The book is being compared to Harry Potter meets Stand by Me.

The book originally came out in 2012 but is now released with a new, more dynamic cover which definitely will entice younger readers although I found myself wondering if it really is a young adult book ahhhh yeah...there is sex but it is only eluded to and maybe young readers won't pick up on it.

A stranger named Silvestrus comes to town with his talking mule Asullus.  Thaddeus' parents are offered gold for him to leave with this stranger who turns out to be a sorcerer with the promise of an education.  Along the way, Thaddeus and other young boys (Anders and Rolland) that the "master" picks up meet demons, ghosts, thieves, beasts, trolls, and more including Fairies who get Thaddeus drunk. Hmm...

I found it to be an interesting read. There are a lot of characters but the main characters are the focal and this is a travel journal with the boys getting to the "collegium" toward the end.

Readers will love the relationships, the suspense, adventure, fantasy and the magic. This is a well written book with much below the surface.

The book comes out October 2019 and will be 1st of 3 trilogies at the College of Sorcery.