The Last Descent - A True Story AND A Must See 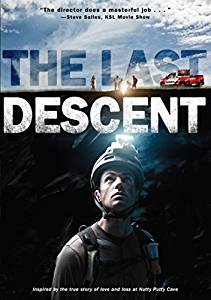 The details of the passing of John Jones in Nutty Putty Cave have been well documented, but his story did not end there. Witness the power of love and family in this critically acclaimed film that shows that family bonds extend beyond this life.

The 411: Last night the family and I watched The Last Descent a true story of John Jones who while cave crawling in Nutty Putty Cave in Utah gets himself in a jam and needs a miracle.

While watching the movie I felt this was a must see. Obviously the writers take creative liberties with the story but after researching afterward and checking into the details of this real event I feel it is important to watch this movie for so many reasons but mostly for the hopefulness we all crave at the end of our days.

The movie is very well done and the actors do a great job. We see John's life story in a series of flashbacks as he talks to the many rescuers who tried to help him. In the movie the main rescuer is named Aaron. Aaron and John's conversations make up most of the movie and I was completely engrossed and praying for the best although I already knew the ending.

John was 26 with a small child and another on the way. It is the way the movie focuses on that unborn baby that gives me chills even now.

The cave has since been sealed up and I pray for John and his family and hope they have found peace.


Disclaimer: I received a complimentary product for my honest opinion.  My reviews are 100% honest and true based on my personal opinion not on a company’s description or request. I am not employed by any company I review for. No monetary compensation was received.