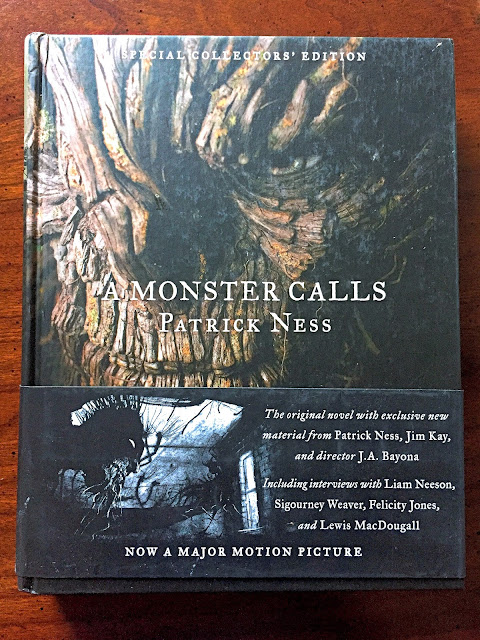 A deluxe hardcover edition of Patrick Ness' masterpiece features the entire illustrated novel as well as more than one hundred pages of extraordinary film-inspired content.

The monster in Conor's backyard is not the one he's been expecting - the one from the nightmare he's had every night since his mother started her treatments. The monster is ancient. And wild. And it wants something from Conor. It wants the truth. From the final idea of award-winning author Siobhan Dowd - whose premature death from cancer prevented her from writing it herself -- Patrick Ness has spun a haunting and darkly funny novel of mischief, loss and monster both real imagined.

In this special collector's edition, discover Patrick Ness's original prize-winning illustrated novel and the remarkable story behind the book and film.

I had never heard of this book or movie and was excited to learn more. This movie tie in is a great companion for the movie. It is the story in it's entirety as well as exclusive essays and interviews it also goes behind the scenes with actors Liam Neeson, Sigourney Weaver, Felicity Jones as well as director J.A. Bayona to find out how the film was made.

There are colorful photos with stills from the movie as well as behind the scenes shots.

I loved this book and NEED to see the movie. Conor is 13 years old, dealing with a very adult thing. The sickness of a parent. The book is at times heartbreaking as someone who lost her mother to cancer I completely relate with a child growing up with a sick parent. It is not an easy pill to swallow.

This monster is NOT the one Conor has been expecting from his dreams. He is scary big, and wants something from Conor. He wants the truth.

I thought the book was thought provoking and deep. I had so many emotions all at once including being thoroughly entertained while feeling the heartbreak of losing my mother.

This a now a movie I need to catch.