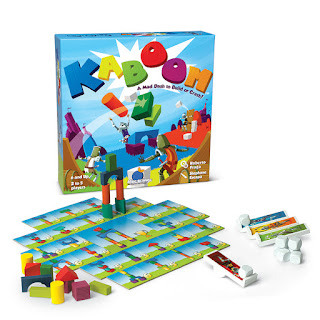 Blue Orange has become a favorite name of ours. We play many of their games. Our favorites are Dr. Eureka, Fast Flip, Wink and All the Tell Tale Games.

A new favorite is Kaboom!


Kaboom
6+, 2-5 players
In this fast flying game of construction and destruction, players take turns playing as the master builder, whose goal is to build as many wooden towers as possible. Meanwhile, all the others play as saboteurs trying to knock down the builder’s towers with their catapults! It’s a mad dash to build or crash!
http://www.blueorangegames.com/index.php/games/kaboom 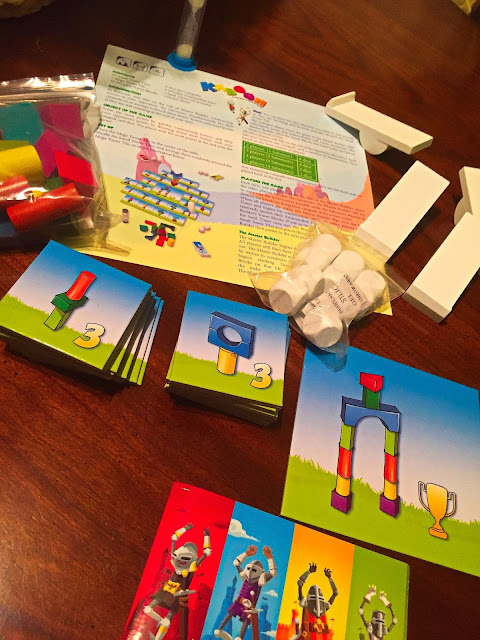 In Kaboom you have 30 seconds to build as many of the towers on the cards that you can while your opponent tries to knock them down with catapults that fling white blocks. If they knock down your tower, you can still build another from a different card but you cannot use any of the blocks that were used in the now knocked down tower. Each card has a value so if you can keep your tower the entire 30 seconds you get that card and that plays into who the winner will be. There is however one card that doesn't have a value and if you happen to manage building that one you are the winner no matter how many cards your opponent has. 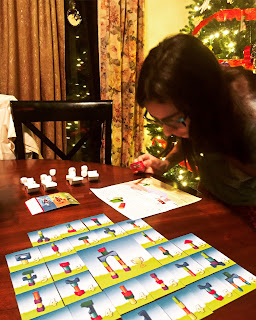 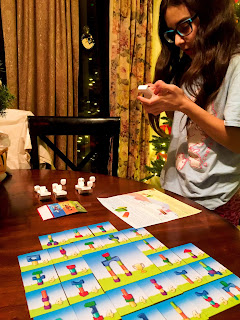 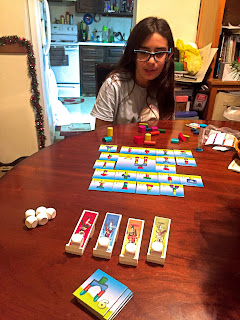 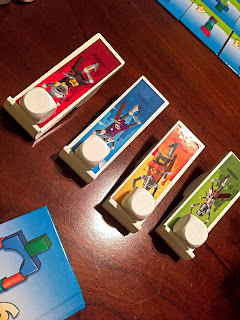 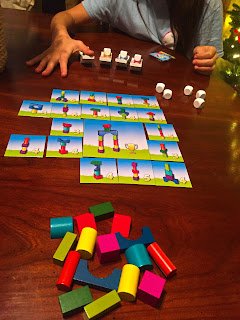 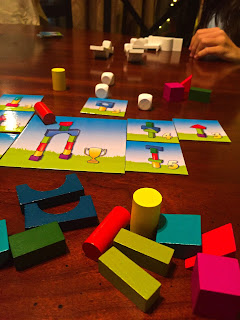 We had so much fun. It was really stressful to build while my daughter was flinging blocks at my tower and to watch the timer but we love it and have played often.

Blue Orange has many more games to choose from and we highly recommend them.
Here are a few others.

Brix
7+, 2 players
X’s and O’s are taken to a whole new dimension in this one-of-a-kind strategy game. Players build a wall of bricks by placing their pieces on top of each other. The first player to align four of their symbol or color in a row wins! But watch out! Each brick contains both your symbol/color AND those of your opponent. So each time you add a new piece, you risk helping your opponent win the game!
http://www.blueorangegames.com/index.php/games/brix

Pinpoint!
7+, 1-6 players
Develop your eagle eye abilities with this new twist on a classic “find the differences” game! Each card has 5 images on it- one Original and four with variations. Players use the process of elimination to locate the Original by pointing out differences in the other four pictures. This brain teasing game will delight kids of all ages as they race to spot the differences in the printed pictures.
http://www.blueorangegames.com/index.php/games/pin-point

U-Turn
7+, 2 players
U-turn is a strategy game that will challenge your visual perception and critical thinking skills. You must remain aware of each of the six different sides of the structure, while thinking ahead about how each piece you add will affect the future shape of the game.
http://www.blueorangegames.com/index.php/games/u-turn

Disclaimer: I received a complimentary product for my honest opinion.  My reviews are 100% honest and true based on my personal opinion not on a company’s description or request. I am not employed by any company I review for. No monetary compensation was received.