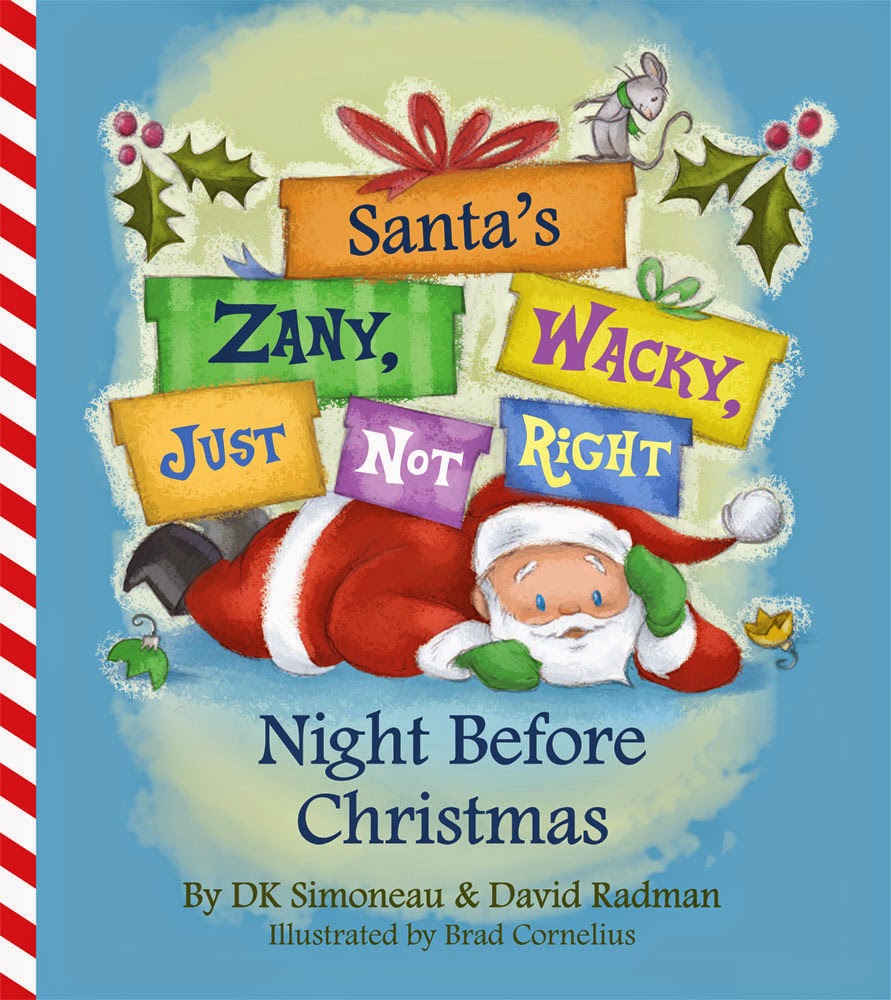 Lakewood, Colorado based author DK Simoneau has teamed with David Radman and written an enchanting, colorful and fun-filled children’s book that sheds a whole new perspective on what it’s like to be Santa on the night before Christmas.  It is a story that sparks the imagination with fun and of pondering what might really happen if one event were to set off a series of changes to Christmas as we know it.

One Christmas Eve it was a cold stormy night;

And nothing at the North Pole was going quite right.

The sleigh was all packed and the reindeer were drawn.

But Santa did not have his Santa suit on. Mrs. Claus was in bed and feeling quite sick.

So doing the laundry was the job of St. Nick.

Only what came out of the washer was no longer bright red.

What he thought was the soap turned out to be purple paint instead!

That night wherever he went all over the world,

people saw changes in Christmas that had their heads swirled.

The pink snow and the burnt candy canes were the last final straw.

Zany and wacky and --just not right at all.

Christmas is ruined and it is all his own fault.

Will the things in the world just come to a halt?

A new spin on the Night Before Christmas concept and what Santa may be going through as he gears up for a very busy night.

Amazon & wherever books are sold.
For more information visit www.santasnightbeforechristmas.com
Santa’s (Zany, Wacky, Just Not Right!) Night Before Christmas is a whimsical tale of Santa’s journey through a Christmas Eve that doesn’t go as he expects.  One small event leads to a series of surprises that change Santa and Christmas as we know it. It’s a story to spark the imagination, make kids giggle, and bring a smile even to a grownup’s face!  Here is a story that even grownup will relate to and enjoy.

The story was conceived out of an interesting conversation between the two authors of how much of Christmas might change if something as simple as Santa’s suit changed to purple.

DK Simoneau says, “There are things in the illustrations that aren’t even reflected in the words of the story, like upside down snowmen, green mittens and plaid candy canes instead of striped ones, a clever little mouse named Matches popping up everywhere, and so much more.”

About the Authors and Illustrator

DK Simoneau is the award winning author of We’re Having A Tuesday, a book helping children of divorce cope with shared custody living arrangements.   She has offered advice on divorced parenting in numerous publications and on various programs, including the CBS Early Show.  She enjoys writing stories that help children express their feelings or inspire them to dream and use their zany, whimsical imaginations. She enjoys traveling, dancing, and sharing time with her own 2 kids in Lakewood, Colorado.

David Radman began writing children’s stories as a single father, when his two daughters were very young. His love of being a dad inspired him to share his creativity through the magic of storytelling. He enjoys playing hockey, spending time with family, and continues to write stories he hopes to be able to share in the future. David lives in Littleton, Colorado, with his wife, two children, and three stepchildren.

Brad Cornelius was born and raised near Chicago, spending his free time learning to draw and watching lots of cartoons. Brad, his wife Melissa and their two greyhounds, are currently exploring the country in a vintage Airstream trailer. This is his second collaboration with DK Simoneau.

Disclaimer: I received a complimentary copy no monetary compensation was offered.