The Unwelcomed Child by VC Andrews 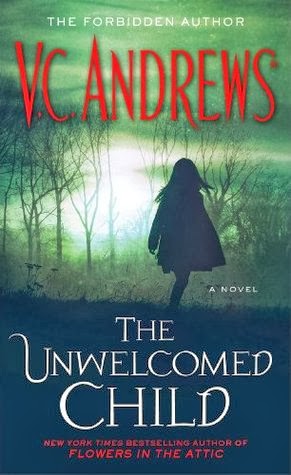 MY MOTHER HAD LOOKED INTO THE FACE OF EVIL SO MANY TIMES SHE KNEW WHAT IT WAS.  IT WAS ME.  I WAS BORN WITHOUT A SOUL…

Discover V.C. Andrews® THE UNWELCOMED CHILD (Pocket Books; January 21, 2014; $7.99) and follow along with Ellie Edwards, who grew up believing that because of her mother’s sinful ways she was born without a soul; that’s why she was abandoned and left in the care of Grandmother Myra and Grandfather Prescott, who try to ensure her evil will not infect them—by raising her in a virtual prison.  Because her days are occupied with homeschooling, strict religious studies, and vigorous housekeeping in their upstate New York home, Elle knows practically nothing of the outside world, even as she emerges as a young woman with impressive artistic talent.  But when she makes a secret, forbidden connection to vacationers at the nearby lake—a handsome boy and his precocious twin sister—Elle’s world will shatter.  Will discovering the truths about her past send her future plummeting to hell?

About V.C. Andrews®:
One of the most popular authors of all time, V.C. Andrews has been a bestselling phenomenon since the publication of her spellbinding classic Flowers in the Attic. That blockbuster novel began the renowned Dollanganger family saga, which includes Petals on the Wind, If There Be Thorns, Seeds of Yesterday, and Garden of Shadows. Since then, readers have been captivated by more than seventy novels in V.C. Andrews’s bestselling series.  V.C. Andrews’s novels have sold more than 106 million copies and have been translated into 22 foreign languages.

I have been a huge fan of VC Andews series books since I was a child. Not even sure why, since I was a child with such a tumultuous past you would think I would hate books that centered on dysfunctional families yet that is VC Andrews writes.

The Unwelcomed Child is a stand alone VC Andrews book about Elle a young girl who is being raised by her overly religious grandmother, sheltered from the world and alone. Elle has spent her life hearing how evil her father was. How unbalanced her mother was and how protected her future should be.

As the child of "rape" her mark on the earth according to grandmother Myra would be one of damnation and she needs to repent and repent and repent.  No time for idle hands, her days are spent, helping to cook, clean, pray and do her homeschool work.

When she is finally given some freedom by being allowed to go to the lake alone and draw she meets the twins Mason and Claudine. These very wordly, very affluent teens are polar opposites of Elle and thankfully are good and do not take advantage of her innocent nature.

I cannot wait to hand this book over to my sister another VC Andrews long time fan to get her take. I thought it was well written. Sits well with the VC Andrews library and I am thrilled that her family contract with like minded writers to keep the genre fresh and new. I was thrilled that the sinister part of the book was not played up and that the innocence of Elle was allowed to remain.

Great book for VC Andrews fans or a great way to introduce younger readers into the world of VC Andrews.

Disclaimer: No monetary compensation was received.  A copy of this book was delivered for my honest opinion.