The Tree Of Life on DVD/Blu-Ray Combo - REVIEWED

I have a giveaway going on right now for the Tree of Life which came out just last week. You still have time to enter it here. If you have not entered yet this is a must see.  With the week before Halloween being so busy for my family, I took some time on Thursday to watch this amazing movie. 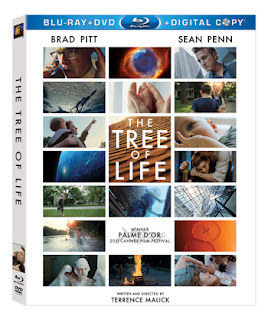 THE TREE OF LIFE

Through stunning cinematography and raw emotional power Malick’s hymn to life excavates answers to the most haunting and personal human questions through a kaleidoscope of the intimate and the cosmic, from the raw emotions of a family in a small Texas town to the wildest, infinite edges of space and time, from a boy’s loss of innocence to a man’s transforming encounters with awe, wonder and transcendence.

An impressionistic story of a Midwestern family in the 1950's, the film follows the life journey of the eldest son, Jack (played as an adult by Sean Penn), through the innocence of childhood to his disillusioned adult years as he tries to reconcile a complicated relationship with his father (Brad Pitt).

In My Honest Opinion:  Going in, I had no idea what to expect from this movie. The synopsis is so vague and while I am a big fan of both of these actors I wasn't really sure if Brad Pitt had the chops for the obvious seriousness of this movie. I must say, I see him in a whole new light. He isn't just a pretty face. This man is a true actor.

While the movie is an beautiful, stunning arrangement of all of the visuals of "life" volcanos, floods, water, earth, trees, people, etc...it truly tries to explain the meaning of life in a palpable way. Pitt is a father of 3 boys married to a beautifully acted by Jessica Chastain, life loving wife who really just enjoys the being alive.  As parents sometimes are, they are polar opposites. While he is a typical 50's dad with an authoritative presence, she is enjoying all the little moments of life with her boys. She loves nature and teaching the boys about being good, caring people and allowing them to be themselves.  He demands respect and  wants them to learn through hard work, discipline and fear. If you put it together it is a balance that most of us will need later in life.

The scenes of father and sons was sometimes hard for me to watch. He is routinely hard on them and his demands seemed more controlling than teaching. While I think the movie is very deep with a lot left unsaid and the ending different and confusing, I don't think this is a bad thing. It like some of the open ended scenes where I as a viewer was not spoon fed a distinct meaning but allowed to make my own assumptions on the direction of the film. It was like watching an opera, sung in a language you don't understand. You may not fully understand the words but you FEEL the meaning. I found myself tearing up many times at the beauty of the film, the emotional portrayal of the family and the loss of our childhood innocence as we come to realize the harshness of reality.

This is not my typical review and it took me a two days to put these thoughts together to give this film the justice it deserves.

This is a thought provoking film to see the very least.

I posted on Facebook that I was reviewing the movie.


Just finished watching Tree of Life starring Brad Pitt and Sean Penn. Have you seen this movie? Very thought provoking and visually beautiful. If you are looking for an artsy, deep, moving, profound, different movie, this is the one! Going to try to put it to words.

Friend: I love the cast. I need to check this out! Thanks

Friend 2: What happened at the end? I had to leave. It was definitely thought provoking.