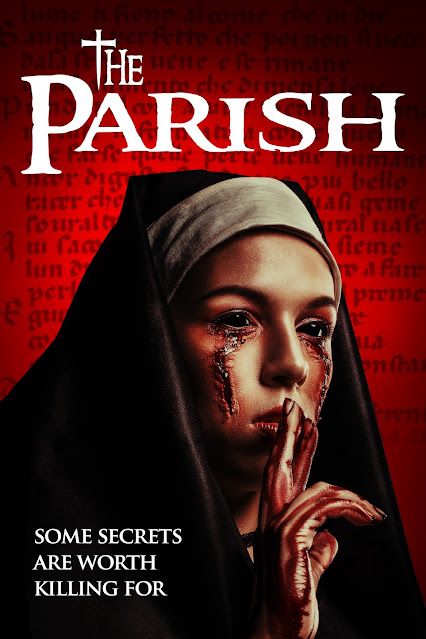 The Parish was directed by David S. Hogan (Z Nation TV series) from a script written by Todd Downing (The Collectibles TV series). Hogan’s wife, Angela DiMarco (1-800 Witches Gotta Burn! 2017), stars in the film as Liz, a recent widow who has taken her daughter, Audrey, played by Sanae Lousis  up the West Coast to try and escape the grief from her husband’s (Ray Tagaville: The Apex 2019) passing. The moment they arrive in their new town, Audrey starts acting weird… even weirder than the average 12-year-old. And Liz starts to see things that others tell her aren’t really there. Is it all in her head? Or is there something supernatural going on? And can she trust all of the people around her?

There is a lot that works here and a lot that doesn’t work. As a Catholic I always find horror films that center around the church particularly creepy, Church to me is a sacred place and nothing should penetrate it so when horror happens inside one, I am really creeped out.

Liz and her daughter Audrey need a fresh start after the loss of their husband/father. Liz’s friend helps them find a house on another coast and Audrey simply wants the familiar. The actress was sweet but the lines seemed to be written for your young girl especially when she is trying to get a lost ball back. Sounds like an elementary school child but she looks about 13.

The movie does a good job about setting up the story. Liz is having nightmares about her husband killed in the service. Audrey is the perfect little artist creating pictures that help drive the story along. Audrey has a new friend who is also new to the school, No such child goes there. The Janitor is NOT the janitor they have both met, There is a threatening nun but she also doesn’t work there. So much mystery!

I loved the old time horror movie feel. Nothing too bloody, gory just the mystery of are they losing their mind or Is the family haunted by their mourning is there something more sinister going on?

The ending made me happy. Everything tied up in a pretty bow. No possible mysterious reason for anything and a good final ending. I truly appreciated the no open ending.

The movie didn’t need to compensate for a bad storyline by unnecessary blood and gore. I thoroughly enjoyed it. Low budget yet but not enough to say waste of time.