Sacrilege A UK Horror Movie On DVD & On Demand 3/16 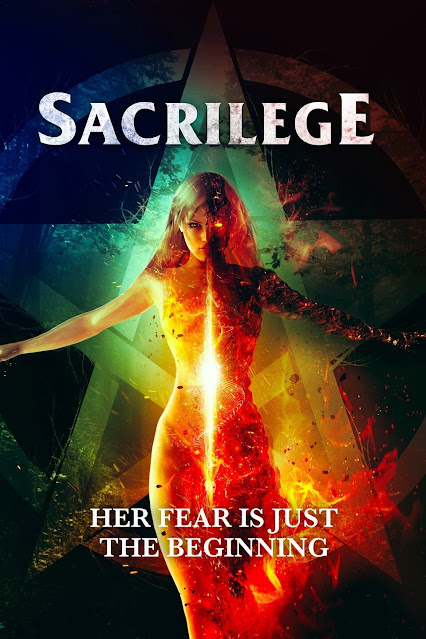 Distributor and World sales company Devilworks picked up North American rights and will be releasing Sacrilege across both the USA and Canada March 16th. The film will receive a full home entertainment release, with a DVD and Premium TVOD day-and-date on March 16th, followed by a full VOD release.

SYNOPSISAfter accepting an invitation to join in with local celebrations for the Summer solstice, four young women find themselves in the grips of a mysterious pagan cult.They are offered up as a sacrifice to the cult’s mysterious ancient goddess, who has the ability to sense their greatest fears. Using this power against them, she turns their nightmares into a horrifying reality.

The movie right off the bat started out strong.  A man comes running out of a house toward a car, suddenly starts smoking, bursts into flames, crawls toward a pool completely engulfed and dies.  The movie switches gears and we see two female roommates planning a night out. The ladies meet up with two other friends one who was in a relationship with one of the roomies. They decide to “get the band back together” and head out for a fun filled weekend. On the way they pick up a cute hitchhiker who tells them about a Pagan festival near the home they will be staying at. When they arrive WE see it is none other than then home from the opening scene.

When our hitchhiker shows up and invites the girls to the festive things turn. Looking for booze and pot the girl take part in a ritual where they write their fears down and throw them into a fire.  The girls are warned to leave the festival by a local parishioner but the pagan priest chases her off.

Strange things start happening but like most horror movies no one communicates anything until it is too late. When one of the four friends, let’s call her the selfie Queen slips in her own blood after seeing her biggest fear “aging” we see where this is going.

Not the best horror movie I have ever seen but certainly not the worst. I didn’t mind it and appreciated the ending.

Disclaimer: I received a screening copy for my honest opinion. No monetary compensation was offered.