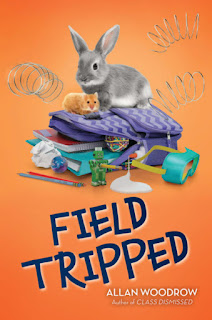 The fifth graders of Liberty Falls Elementary might be the worst fifth graders ever, but they still get to go on a field trip! They're going to visit the Edward Minks Mansion to learn about the eccentric inventor and founder of their town. Legend has it that there are some undiscovered inventions hidden in the house. The students are eager to find them, and they convince Principal Klein to let them out of writing their essay on Minks if they do.

Eddie thinks he has the best chance of finding the inventions, since Minks was his great-great-great-grandfather. However, he won't let anyone help, not even his trip buddy, Aaron. Aaron is the new kid and just wants to make friends, but he's mostly feeling left out. Chloe wants to find the inventions; however, her best friend, Sophie, has other plans for the trip. And Jessie thinks that something weird is going on at the house, but no one believes her until the students notice there are inventions missing. They quickly realize someone might be taking the secret inventions, and they are not going to let that continue to happen!

Can a fifth grade that's better at pranks than working together find a way to save the field trip, stop the thieves, and get their schoolwork done? Or will this be the last field trip ever?

Field Tripped is the perfect book for reluctant readers in Middle School. 5th Graders Eddie, Aaron, Chloe and Jessie and the rest of the grade are heading out for a field trip with the principal to the late inventor Edward Minks Mansion.

Everyone comes with their own agendas but must eventually work together to solve the mystery of the mansion before it is too late.

What I loved most about this book:

I really enjoy when authors allow us to get to know more than one character. This could have easily been a book about Eddie but fortunately each chapter features the story line for one of four characters.

The children are likeable and relatable. Eddie wants to help his family with their finances. Aaron is always a new kids due to his dad being in the military. He just wants to make friends. I probably love him most. He has respect for his dad and wants to help and protect his new friends.  Chloe is growing up and sort of outgrown her "mean" friend. She doesn't always like what she does but hasn't gotten the strength to stand up to her yet although she really wants to.  Jessie loves her cats and thinks about them all the time. She knows that her cats would be able to pick out who to trust and not trust.

Edward Minks was kind of Willie Wonka without the candy. His inventions and quotes were mostly odd and different which made reading the book so much fun.

Kids will like the book because it is funny, has an interesting story line, is full of mystery, and has a moral foundation that talks about friendship and helping others. Most kids really just want to do the right thing.


Disclaimer: I received a complimentary unedited proof for my honest opinion. No monetary compensation was offered. All opinions are my own.