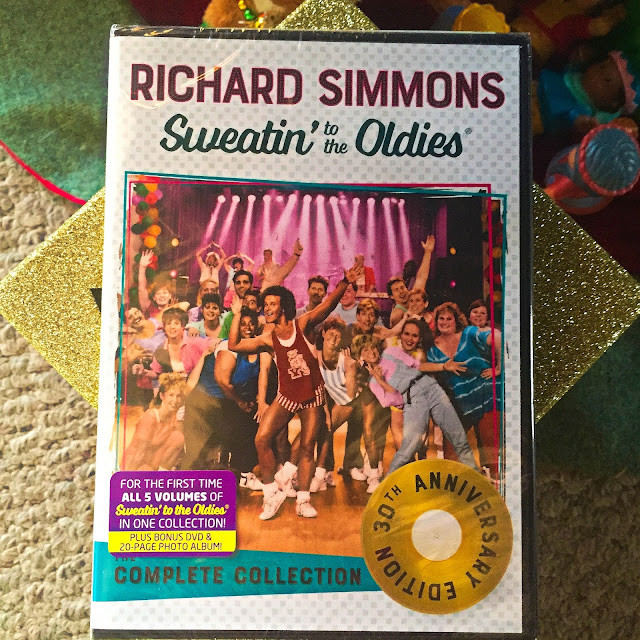 "I dare you to sit still on your couch with this DVD on the TV...Once you dance with Simmons, there's no going back." -- Pop Matters

"You don't stick around in the fitness world as long as Richard Simmons has without having something special to offer. Simmons' kooky enthusiasm, easy-to-follow workouts and message of acceptance have inspired millions of people to try to shed those extra pounds." -- The Los Angeles Times

HE REVOLUTIONIZED THE FITNESS INDUSTRY,  MELTED AWAY THREE MILLION POUNDS AND BECAME AN INIMITABLE PART OF POP CULTURE HISTORY...

RICHARD SIMMONS: SWEATIN' TO THE OLDIES:

This is the complete set of Sweatin' to the Oldies Collection (Vol 1-5).
It includes the Uncut, Original Platinum Selling Releases of "Sweatin' to the Oldies," Plus Exclusive Bonuses Including, "Love Yourself and Win," Packed with Testimonials and Success Stories, an Interview with Simmons and More!

FAIRFAX, VA -- For thirty years, the inimitable Richard Simmons has been helping people lose weight (more than 3,000,000 pounds and counting) and get healthy with his unique enthusiasm, charm and encouragement.  Since opening his first aerobics studio in Beverly Hills in 1974, he has cemented himself in America's pop-culture psyche with 65 fitness videos (selling over 20 million copies), dozens of infomercials, nine best-selling books, myriad parodies of his over-the-top persona, and seemingly endless TV and film appearances.

Loaded with extras, this special anniversary set also includes 100 minutes of bonus programming featuring an exclusive interview with Richard, testimonials and success stories from Simmons'  students, a full-color 20-page album of rare personal photos and memories personally selected by Richard and a bonus disc of "Love Yourself and Win -- Six Steps to Self-Esteem & Permanent Weight Loss."

With the overstuffed holidays coming potentially adding on unwanted pounds, there's never been a better time to become re-acquainted with one of the best-selling home entertainment fitness series in history with RICHARD SIMMONS: SWEATIN' TO THE OLDIES: 30TH ANNIVERSARY EDITION.

About Time Life
Time Life is one of the world's pre-eminent creators and direct marketers of unique music and video/DVD products, specializing in distinctive multi-media collections that evoke memories of yesterday, capture the spirit of today, and can be enjoyed for a lifetime. TIME LIFE and the TIME LIFE logo are registered trademarks of Time Warner Inc. and affiliated companies used under license by Direct Holdings Americas Inc., which is not affiliated with Time Warner Inc. or Time Inc.

I was and still am a avid General Hospital fan which is where I first was introduced to the Bob Ross hair styled Richard Simmons.  He was the exercise instructor at the Campus Disco back in the very early 80s that introduced aerobic dancing to the characters of GH. It was a whole new way of exercising and it was sweeping the nation.

With Sweatin' To The Oldies you basically danced yourself thinner. Richard came up with exercises that anyone could do. Big, small, old and young could dance themselves to a fitter self. The songs were mostly songs that everyone knew.  It was mostly low impact and so much fun!

Everyone exercising with Richard was your every day person. There were no leotards or tights, just normal street clothes. It was like a dance party!

When I was younger I had two of these and thought it wasn't enough for me. Now at 51 I have done I love Sweatin' To The Oldies. It is just right for me to get back into the swing of things.  I was able to keep up and looked forward to doing it every night the past 2 weeks. Usually I get discouraged because I can't keep up with the routines. This is perfect!

Look for this and other great items on my Holiday Gift Guide located at the top of my page.

Disclaimer: I received a complimentary copy for my honest opinion. No monetary compensation was offered or received.