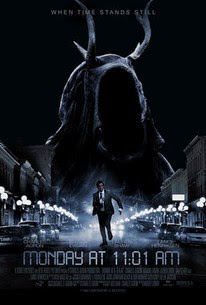 Earning four out of five Skulls from Bloody Disgusting, “Monday At 11:01 A.M.” stars Charles Agron as Michael and Lauren Shaw as Jenny, a young couple who find themselves in a beautiful yet eerie mountain town where everyone seems strangely familiar. While Jenny busies herself in a small antique shop – Michael wanders into the local watering hole. The bartender (Lance Henriksen) dares Michael to check out Olivia (Briana Evigan), a sultry brunette in the corner. After a drink, Michael takes him up on the offer and moves to sit next to her. The two begin an ominous flirtation with Olivia slipping him her phone number.

Michael and Jenny decide to stay overnight at the dimly lit and aging hotel. During the night Michael is jolted out of bed when he hears frantic screams from another room. When he calls the front desk for help, he is met with cold indifference. No one believes him including Jenny. As his hallucinations become more real through a series of horrific events. Michael finds himself desperately trying to walk the line between reality and the terror that awaits him.

RATED “R” for some bloody violence, and language throughout including sexual reference >  RUNNING TIME: 96 mins 10 secs.

Monday at 11:01 AM had me wondering until the end. From 3 minutes in I wondered about our main characters. I flip flopped repeatedly a few times between them being in a weird town, in purgatory or in the middle of a weird satanic group of vampires.  Michael and Jenny are a couple on a road trip. They enter a small, quaint town and Jenny asks if they can stop and shop. The town is full of people and they decide to get a room and stay over. Michael somehow gets a room after being told they are at full capacity. He and Jenny wonder if he somehow at some time had been here. The manager seems to know him. There are parts of the hotel that bother him especially a large old door in the dining area that makes him uneasy.

Overnight Michael is woken by screams that no one else hears. When Jenny goes missing, the town takes on a whole new feeling. Michael is seeing things that make him uneasy and no one seems to even remember him having a guest with him when he came to the hotel.

The ending tied up all the loose ends and I was left with an Ohhhhh OK feeling. It wasn't a terrible movie. I watch a lot of movies and if I don't pick up my phone to check Facebook or play Hayday it is a decent movie. The only problem I had was with the lead actor who played Michael.

Disclaimer: I received a complimentary copy of the movie from K Street Pictures. No monetary compensation was offered or received.