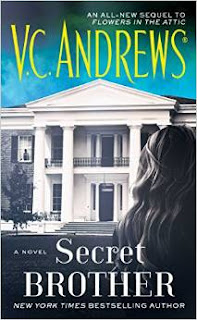 SECRET BROTHER (Pocket Books; May 26, 2015; $7.99), a new novel from V.C. Andrews® tying in to her seminal Flowers in the Attic, reinvigorated the franchise when Lifetime TV aired the first two of four new movies based on the Flowers series in 2014.

Following the events of the two Christopher’s Diary books (Nov 2014, Feb 2015), we have learned that Cory Dollanganger did not in fact die in Flowers in the Attic, as has long been believed. This is his story of survival and amnesia, as told by the new “sister” he gets with his new “family.”

I have been sitting on this book for a few months and finally got a chance to read it. I loved every single page.

In this version we find what really happened to Cory Dollanganger after he was taken from the attic.

While Clara Sue's brother Willie was dying, someone had dropped a little boy off at the hospital. He was poisoned and just left there. He has no family and doesn't remember anything. While Clara tries to come to grips that her beloved little brother is gone, her Grandpa has decided to take over the care of this little unknown who has no one.

What a fantastic read. While I read other reviews who had a problem with the fact that the story focuses on Clara and not the story of the Dollanganger's I loved the fact that they are not re-writing a story written by a beloved author. Having Cory or Count Piro as a secondary character is perfect. This book stands on it's own for those who have never read any of the Flower in the Attic Books/Dollanganger series.

It is a story about a girl with deep loss and the many lessons she learns about herself and the people around her. It is a coming of age story that I can't wait to pass over to my niece to read.