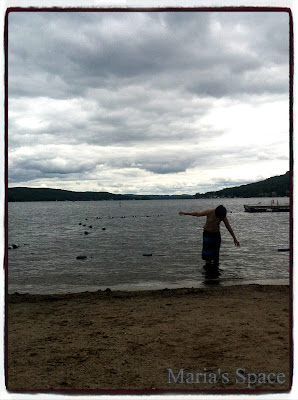 Life for me has been meh! Mostly because of things that are too personal for me to discuss in the virtual world never mind my personal life. Just know that I'm OK but my heart hurts and I cry so much that my eye bags have eye bags.  However, my spirit doesn't allow me to wallow. Never has, never will. I take time at night and sometimes when alone to purge all the negative energy from my soul but I'm fine and my heart will heal. This I know!!!!

Adding to my stress is the second broken bone summer. This time it was my Handsome. Thankfully I was able to get the shot of him above the day before the break. We had headed down to the beach on a really, really crummy day. There was zero sun. The beach was pretty much empty. I was not going in the water but wanted the kids to get in there.

My Handsome wanted to swim to the floating dock which required him to take a swim test which if he passed would be logged in a book so he wouldn't have to take another for the season. He approached the lifeguards and asked to take the test. They called over the manager.  I sat at the beach wondering how he would do. She explained it to him. I worried he wouldn't understand. He started swimming and nailed it! I was so proud. His skill floored me. He not only heard what he needed to do but swam so strong and fast. He spent two hours jumping off the dock into the lake.

We headed home and the night went as on as usual. The next day we got a text from Goddess' friend's mom who wanted to know if we wanted to meet at the park. We did. Handsome did not. He never wants to go anywhere once he is home and playing a video game. I explained that he could go to the library and we can't base our lives on whether or not he wants to leave because then we would go nowhere.

We got to the park, Handsome went to the swings and Goddess ran with her friend. I was talking to a friend for about 15 minutes. I saw him swinging. I saw the girls. I was talking but since they are not toddlers I took my eyes off them every once in a while to talk to my friend. A year ago I was a helicopter mom who didn't let them out of my sight and if they were an arm length away they were too far.  Now at 12 he is fine on the swings. I am allowed to talk.

He's swinging, I'm talking and then he walks over to me. I see him out of the corner of my eye. He seems fine and and says calmly, "Mom I just fell off the swing."  My friend and I ask are you OK? and she adds, "Awww you have some mulch on you."

He says, "I hurt my arm." I now notice that he is holding it and ask if he wants to come to the car so I can get the emergency kit to clean his scratches. One on his knee and one on his inner wrist which I can only seen a part of because he is holding his arm.

"Yes, and I want to lie down with you" he says.

We both ask if he hit his head but he says no.

As we head to the car I ask if he is alright and he starts crying telling me his arm hurts. We get to the car and he won't take his hand away from his forearm but I can see on the underside it is scraped. I am thinking he got a few scraps and needs to be cleaned. He lies down and starts crying. He repeats that it hurts. I ask him to please sit so I can see it. He yells no that I can't touch it. I mention that perhaps we should go to the hospital but he says he is fine.

Telling him I will be right back I walk over to my friend and say he hurt his arm but won't let me touch it.  I call my husband and when it goes to voicemail I text saying, "call as soon as you can, Handsome hurt his wrist". He does and I bring the phone back to Handsome so they can speak. My son stops crying and I hear him saying, "yes I can move it." He lifts his arm from the shoulder and I think OK, good he didn't do that for me.

When he hangs up he starts crying again.  OK...now I know it is time to go to the hospital. He has been crying off and on for 25 minutes. I mention the hospital and he says it's not broken. I say, "We don't know and we need to check." He agrees.  I now know it is broken.

After asking my girlfriend to take Skye with her and I will pick her up after the hospital,  I call my husband to tell him we are heading to the ER for an x-ray. Handsome is crying for too long. He says to let him know when I know something.

Handsome asks me to help him out of the car. When I do I feel the underside of his arm slightly. It is swollen. He says, "mom, it's all big over here." I tell him I know and that is not a good sign and to not be surprised if they tell him it is broken. I reassure him that it's fine, we will deal with it when we know and that it's OK because if he remembers Goddess from last Summer it will be fine.

Thankfully, no one is there. We get right in. He won't let them look at it easily. X-rays sucks because they have to get him to put his arm down and he is not happy. I hear him screaming that they are hurting him through the door. 'Mommy" with more crying makes my heart break. I yell from the other side that I am there.

They let me in momentarily so he can see I am there. He is not an easy patient.

It is BROKEN. He has a buckled fracture of the ulna and radius. 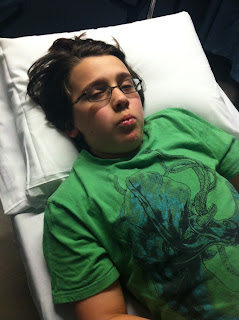 He tells me to take a photo of his P'd face (pissed OFF). The doctor comes in. He is great with my son. The cast is wrapped and we make an appt with a specialist.

The specialist tells us it's a 4 week cast. We can do that. The cast comes off on Aug 3rd. Still a month of Summer which I think we can do our best to make up for the loss of water time.

Things happen. We will survive this and thank God it was just a broken arm.

Even with a broken forearm, he tells me he is having a great summer. This makes my heart soar!

We have spent a lot of time together. We play games, go to the library, watch movies and TV, went to the movies, play ping pong every day. Life is good!

(Wrote this before with less detail. Sometimes I write for my Blog Book sometimes for the blog. This is a blog book post!)