You've Got A Friend - A Family Friendly Movie Review 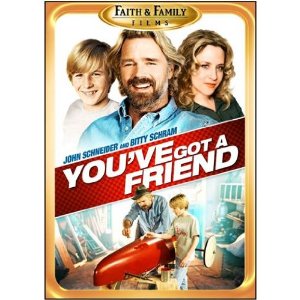 You've Got a Friend

John Schneider (TV's "Smallville"), Dylan McLaughlin (TV's "iCarly"), Chase Ellison (Tooth Fairy) and Bitty Schram star in You've Got A Friend, a charming film about family, friendship and determination. Bobby Graham (McLaughlin) is a strong-minded twelve-year-old boy who won't let his personal problems get in the way of his dreams. With the odds stacked against him, Bobby remains driven to prove himself through perseverance and a newfound self confidence. Join Bobby's exciting race to the finish line in this fun and endearing adventure that will make you stand up and cheer!

You've got everything you would expect from a Faith & Family Movie an angry, misunderstood loner, a kid who has lost his parents, a brooding uncle who has taken his nephew in after his estranged brother passes away and a bully whose dad demands him to be first! You can see the set up for a whole lot of healing and more coming a mile away.

You've Got A Friend starring one of my childhood crushes John Schneider so I was already excited before it even started.

John Schneider plays Jim, a Viet Name Vet who was a Derby Car champion. Dylan McLaughlin, an adorable, sweet looking boy plays Bobby Graham, a smart, kid who is looking for someone to help him with a Derby car, something he and his dad were working on before his father's death.  He tries to get his Uncle Jeff to help but Jeff is busying running his hardware store and has some underlying anger toward Derby.


I will never understand movies where a child loses their family and has to deal with such negativity. Thankfully, Bobby's teacher and Jim care deeply for Bobby and want to make sure he is happy and doesn't feel alone! Thankfully, it doesn't take long before his Uncle comes around and everyone is happy.

Does Bobby win the Derby? You will have to see the movie and find out.

The story is a wonderful, feel good movie about taking chances, forgiveness, friendship, family, achieving your dreams and not judging others.

A+ and a great family movie!

Disclaimer: I received a complimentary DVD for this review. No monetary compensation was received.