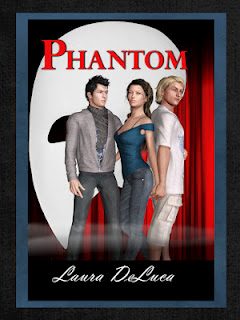 The “Phantom” was a musical phenomenon that Rebecca had always found enchanting. She had no idea that her life was about to mirror the play that was her obsession. When her high school drama club chooses “Phantom” as their annual production, Rebecca finds herself in the middle of an unlikely love triangle and the target of a sadistic stalker who uses the lines from the play as their calling card.

Rebecca lands the lead role of Christine, the opera diva, and like her character, she is torn between her two co-stars—Tom the surfer and basketball star who plays the lovable hero, and Justyn, the strangely appealing Goth who is more than realistic in the role of the tortured artist.

Almost immediately after casting, strange things start to happen both on and off the stage. Curtains fall. Mirrors are shattered. People are hurt in true phantom style. They all seem like accidents until Rebecca receives notes and phone calls that hint at something more sinister. Is Justyn bringing to life the twisted character of the phantom? Or in real life are the roles of the hero and the villain reversed? Rebecca doesn’t know who to trust, but she knows she’s running out of time as she gets closer and closer to opening night. Only when the mask is stripped away, will the twenty first century phantom finally be revealed.

First, don't be thrown off by the cover. The 3 characters are very Sims like and there is more to this book than this cover depicts. It is much deeper and you will find yourself completely engrossed in this modern day version of Phantom!

This is my third Laura DeLuca book and what I can tell you about Laura is that you can tell that she really loves creating her characters. Each character in Phantom is important to the story and all very well rounded. I wonder if she has a back story for each one! I wouldn't be surprised.

Rebecca is like every one of us in high school. She has a few friends. She longs for the popular boy but he is so far out of reach. Her talent as a singer would probably have gone unnoticed if the school wasn't looking to cast the roles of her absolute favorite play Phantom of the Opera. Overcoming her shyness and nerves she sings the songs that she knows by heart and wins the lead role of Christine. While she has been dying to be on popular boy Tom's radar forever, she is now drawn to new guy, Justyn who wins the lead of the Phantom.  With Tom and Justyn vying for her attention and affection, Rebecca finds her life paralleling Christine's.

People are dying, accidents at every corner and Rebecca is living the role she obsessed over.

What a great read it made me long to see Phantom of the Opera again.

This was a mystery, love story, and musical all tied into one! There were so many quotes from the play, the songs, the words of the lovelorn Phantom and his obsession with Christine are throughout the book. Laura must be a BIG fan of Phantom!

Also, kudos to Laura, it wasn't until I was 85% through the book that I finally realized who the villain was.   Whenever I thought I had it figured out, I didn't. If you read it and knew before that, I would love to hear from you. 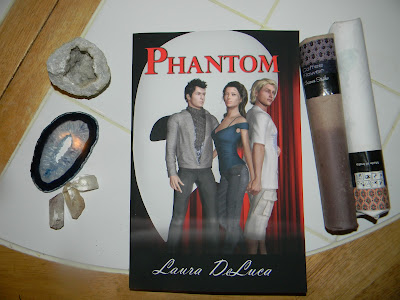