Have You Watched Netflix The Perfection? Loved it? Own It! Bid Until 6/28 On Screenbid.com

Calling all horror movie enthusiasts! Dress like your favorite movie star, Allison Williams as her pleasant-seeming, doe-eyed self in her most recent fan-favorite film, The Perfection. Williams shines throughout the film as she beautifully shift from victim to villain, all while maintaining her appealing exterior. Beginning TOMORROW, Thursday, June 20th until Friday June 28th fans of the film will have the opportunity to take home part of the film, and encapsulate Allison Williams and Logan Browning’s charming and powerful demeanor by bidding on Screenbid.com- Hollywood’s leading auction site! The one-of-a-kind auction will feature 100 unique, hand selected items from the movie including costumes from the darkly divine Williams, décor, and various props such as the infamous cleaver, so fans everywhere can re-live their favorite moments from the film. For super-fans everywhere, the items in this auction could be an amazing irreplaceable Halloween costume as they are all the original items worn and used by their favorite characters on set!
The Perfection is Netflix’s newest original horror feature, starring Logan Browning as Lizzie and Allison Williams as Charlotte. As a musical prodigy, Charlotte finds competition within new-comer Lizzie. Their rivalry makes for a thriller full of plot twists, leaving viewers in shock and awe.  The internet has already been raving about The Perfection, saying everything from how it is a “near-perfect psychological thriller” to “not perfect for faint of heart”. Whether you are a classical music fanatic or adrenaline junkie, The Perfection is a film that is sure to be an instant cult classic that you’ll want to fill your costume closet with!
Fans will have the opportunity to bid on one-of-a-kind items such as Charlotte and Lizzie’s Cello Bows, Charlotte’s Cleaver, Bachoff Chapel Blue Velvet Chair, Lizzie’s Sling, Anton’s glasses and Lizzie’s dual final scene outfit and so much more on www.screenbid.com. The auction will go LVE on Wednesday, June 19 at 9:00AM EST//12:00PM PST!! Make sure to snatch up your favorite props and costumes before someone else does. 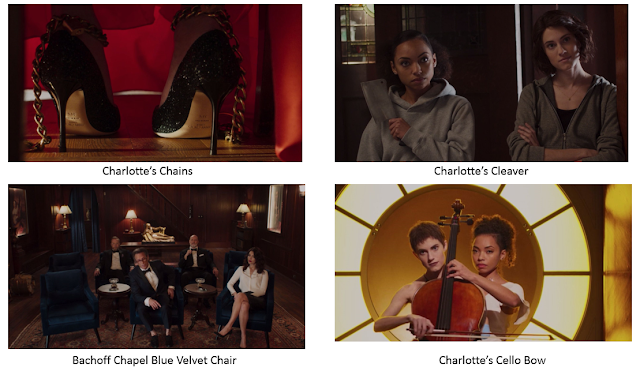 The 411:
My husband and I watched it and usually the TV is on as background noise but we both closed our laptops and really paid attention, totally invested in this original movie from Netflix.  It has been a while since we found something worthy of our attention.
When I thought I had it figured out, I didn't. Love movies like that. We watch a lot of horror; it is our favorite genre and found this to be pretty decent. I call myself the amateur review because honestly I think most reviewers take themselves and the films too seriously. The movie is basically a rape revenge movie. While it doesn't hit trigger any uncomfortable levels of abuse the movie is about a man who uses his power to abuse young girls. I have read some other reviews and man they read so much into the movie. For us it was two girls who meet as young girls, fall in love after meeting later, go on a trip, one becomes ill and the movie takes a turn from there.  I don't want to spoil it but it was weird, strange, odd and at times I thought wait...what? There wasn't another way to handle this situation? But with that said, we were entertained. I do know this movie has a fan following so I am sharing the above.