I Couldn't Put Down Speed of Life by Carol Weston 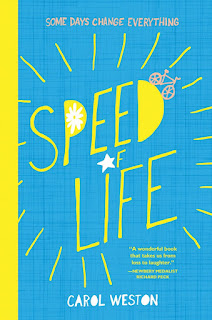 Speed of Life
by Carol Weston
What Happens When the Keeper of Your Most Embarrassing Secrets Starts Dating Your Dad?
NEW NOVEL BY POPULAR ADVICE COLUMNIST TACKLES LOVE, FAMILY, GRIEF, AND GROWING UP
“Complex characters and a strong voice make this one stand out.” –Kirkus, STARRED review\
“Sofia’s growth—amid unexpected interest from boys, her first relationship, new additions to her family, and grief—is both relatable and moving.” –Publishers Weekly STARRED review
“This slice-of-life story echoes the author’s own experience as a teen magazine advice columnist … Weston isn’t afraid to tackle the squirm-inducing questions common to high school freshmen.”
–School Library Journal STARRED review

Parenting Magazine says, “Carol Weston gets girls.” Weston has been the Dear Carol advice columnist at Girls’ Life for more than two decades and has replied to tens of thousands of letters from girls seeking anonymous advice. This incredible inside-look into the teenage brain helped inspire her critically-acclaimed new novel, Speed of Life (April 2017).

When fourteen-year-old Sofia discovers Dear Kate, an advice columnist from Fifteen Magazine, she’s relieved to find someone to confide in about everything from crushes to sexuality. Talking with her widowed dad about puberty or boys is awkward, and while Sofia’s best friends were supportive at first after her mother died, it has been eight months, and they’re eager for Sofia to move on.

Problem is, Sofia can’t recharge like a cellphone. So yes, it was comforting to tell all (all!) to Dear Kate, but then Sofia never imagined that her confidante would start dating her dad. Speed of Life chronicles one year in the tumultuous and ever-changing world of a girl who thinks her life is over when really it is just beginning.
“In my Girls’ Life column, many girls have written me to say that they lost a parent or loved one and are ‘still not over’ it. I tell them to be patient with themselves and that they may never ‘get over it,’” Weston says. “I also say that they will learn to accept the loss. Time doesn’t heal, but it helps.”

Newbery medalist Richard Peck calls Speed of Life a “wonderful book that takes us from loss to laughter.” Novelist Julia Alvarez says, “Speed of Life is the kind of book that you want to read speedily, all at once, because the characters are so engaging, the voice of the narrator pitch perfect, the situations convincingly real and raw, the humor and liveliness of the prose such fun to follow, and the feelings of that time in a teenager's life when everything can go from awful to awesome in a heartbeat are so vividly captured. You won't want to put it down. But my advice is slow down and savor this delightful book, full of cariño, funny and heartfelt, and (spoiler alert) not just for teens.”

The movie rights have already been sold.

This is a story that called for me to read it. I couldn't put this book down even in the middle of my very busy mommy, work and blog life. There is so much I love about a girl named Sofia who like me lost her mom as a young teenager. I was going on 12. At times I found myself re-reading passages as I remember those firsts without my mom. Oddly enough the dates resonated with me. Sofia's mom died April 8th. So did my mom. Her mom's birthday was in June. So was my mom's. Sofia and Maria rhyme. OK maybe it seems like a stretch to you but that little 11 year old Motherless daughter is still living in me and I visited with her a few times during my reading this book.

When Sofia meets Advice Columnist Kate her life changes. She not only has a confident, someone she say everything she is thinking to but suddenly her dad starts dating her. What is she to do when the person she has told her deepest feelings to is now in her life face to face?

The characters are well written and real. This is a funny, sarcastic filled with heart.  I have read other reviews on Speed Of Life and know some were shocked by the fact that Sofia didn't push against the changes in her life or even her father starting to date early. I can tell you as the daughter of a grieving father the last thing you wanted was to upset him more or see him cry another day. Anything that would help him not grieve was OK. Sofia is not an angsty teen so she would not push against these changes.

There is a romance in the book when Sofia meets Sam but it is the perfect first romance. I would be OK with my new 12 year old reading this book. There relationship is perfectly innocent.

It is no wonder Carol still is the Advice Columnist at Girl's Life and has been since 1994. She has a youthful way of writing that crosses across the generational lines. I think my 12 year old would love this book as much as I have at 50. Whether you associate with Sofia or Kate in this story you will love it!


About the Author:
Carol Weston has been the Dear Carol advice columnist at Girls’ Life since 1994. Her sixteen books include Ava and Pip (which the New York Times called “a love letter to language”), Ava and Taco Cat, Ava XOX, The Diary of Melanie Martin, and Girltalk, which came out in a dozen languages. Weston has been a guest on The TODAY Show, The View, and Oprah, and her work has been featured in The New York Times, Parenting, Redbook, Cosmopolitan, and Seventeen. She has had over 45 letters to the editor in The New York Times. Carol studied literature at Yale, graduating summa cum laude, and has an MA in Spanish from Middlebury. She lives in Manhattan.