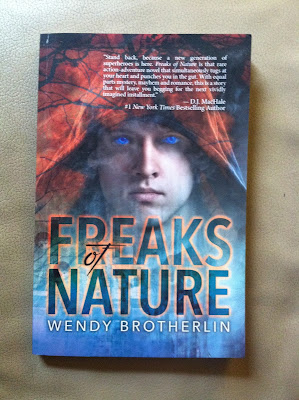 Nickelodeon’s “Are You Afraid of the Dark” writer, Wendy Brotherlin, debuts an exciting action-adventure novel that’s stealing the hearts of YA fiction enthusiasts everywhere.

Watch out “Divergent” — the first book of “The Psion Chronicles” is officially on the market and ready to steal your spotlight.

Written by former Nickelodeon screenwriter Wendy Brotherlin, “Freaks of Nature” is a 237-page turner packed with adventure, mystery and romance. But careful — you may lose some zzz’s because this is a book you won’t be able to put down.

The story takes place in the aftermath of the Ebola-X pandemic of 2022, which lasted five months, two weeks and six days, wiping out millions of people before a cure could be found. In its wake, it left a generation of psionic freaks who can turn a single thought into a weapon… or worse.

The story’s protagonist is 15-year-old Devon McWilliams who is one of those ‘freaks,’ but instead of some awesome ability like telekinesis or telepathy, he talks to plants. In other words, Devon rates a big fat zero on the scale of cool psychic abilities. Days after escaping from his psionic detainment facility, the military intercepts him. Regaining consciousness, Devon finds himself restrained aboard a military airship headed toward lifetime incarceration or certain death.

Also aboard this one-way flight to doom are six other psions. One of them, a telepath named Bai Lee, claims to have the means to escape. All the others have to do is convince her that they’re worthy of freedom. This is not good news for Plant Boy. The last thing he wants to do is reveal his useless plant-talking prowess to this kill-you-with-a-thought crew. To complicate matters further, he’s crushing hard on Alya, the lovely healer.

Devon knows he must keep his wits about him if he’s going to survive this wild ride. And that’s going to be a tricky thing to do around a determined telepath who seems to have a diabolical agenda all her own.

In writing the book, Brotherlin drew on her experiences playing Dungeons & Dragons.

“Psionic powers were a part of that game,” Brotherlin said. “I have always been intrigued by the idea that a thought could be used as a weapon. While crafting this story, I took great care in developing the characters’ psionic abilities.”

While Brotherlin’s story centers around one main character, Devon, it also travels into the points of view of several others.
“As a writer, I love to step into the shoes of my characters and take a nice, long walk,” she said. “I spend a lot of time with each character. I know where they come from and who they are, right down to their favorite foods.”

ABOUT THE AUTHOR
Wendy Brotherlin is a screenwriter, music enthusiast and all around geek-goddess. She earned a Masters in Screenwriting at the University of Southern California and went on to write for children’s television, including Nickelodeon’s “Are You Afraid of the Dark.” Today, she lives in Manchester, Maine with her husband and two little superheroes-in-training. “Freaks of Nature” is her first novel.

This was a really fast moving book. The action and detail was really fun to read. It reads like you are watching a movie.

I loved the characters in this science fiction book by Are You Afraid of the Dark writer Wendy Brotherlin. We are huge fans of the Nick show and I knew I would love this book going in.

Devon is our main character. He is just one of the psionic freaks who must fight to stay alive after being captured by the military.

Each of the psionic's have various supernatural talents such as moving earth, talking to plants, mind reading, and more.

Any lover of science fiction will love this interesting take on a world after global pandemic.

Really quick read but completely action packed. My favorite parts are of Devon and the plants. Really genius writing.