You Have to F**king Eat; The Long-Awaited Sequel to Go the F**k to Sleep, Is Here! @AkashicBooks 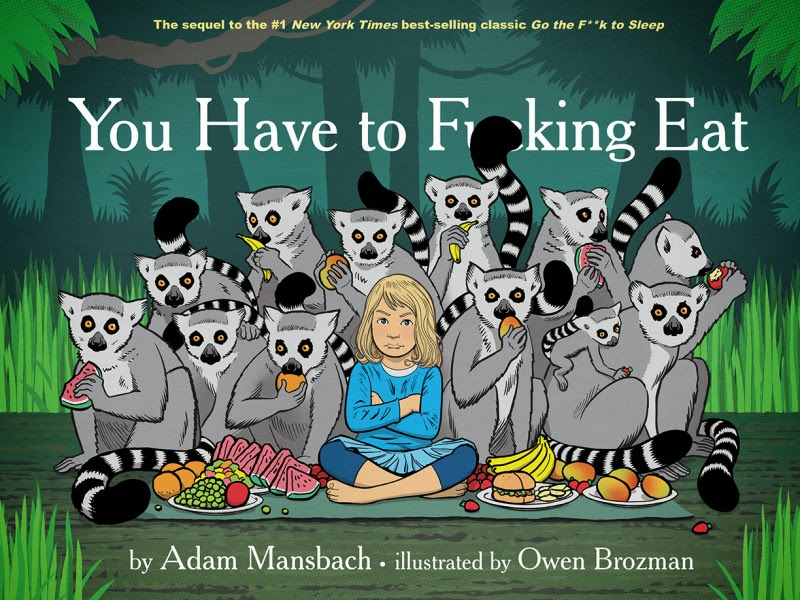 "You Have to F***ing Eat makes parents of picky eaters smile."
—TODAY Parents

"Adam Mansbach . . . will delight exhausted and exasperated parents everywhere for a second time with You Have to F**king Eat—another children's book that is most definitely not for children."
—Entertainment Weekly

"An equally hilarious ode to kids at the table."
—Huffington Post

"Parents, Adam Mansbach gets you. He understood that sometimes your kids just won't go the f**k to sleep. And, in his new foulmouthed bedtime book for parents out Wednesday, he understands that sometimes they just won't f**king eat. And he knows, well, it's really f**king annoying. So how about some f**king comic relief?"
—GQ

"A likeable variation on a universal f***ing theme."
—Kirkus Reviews

"You Have to F**cking Eat, Sequel to Go the F**k to Sleep, Is Finally F**king Coming . . . It will arrive just in time to gift it to your brother-in-law, who, upon unwrapping it, will clutch it immediately to his chest and shake his head furiously at his waist-high daughter as she claws at him with her chewed up nails. 'No, no, it's not for you,' he'll say, laughing and crying at the same time."
—Flavorwire

"An uproarious spoof of bedtime board books."
—San Francisco Chronicle

From the author of the international best seller Go the F*** to Sleep comes a long-awaited sequel about the other great parental frustration: getting your little angel to eat something that even vaguely resembles a normal meal. Profane, loving, and deeply cathartic, You Have to F***ing Eat breaks the code of child-rearing silence, giving moms and dads new, old, grand- and expectant, a much-needed chance to laugh about a universal problem.

A perfect gift book like the smash hit Go the F*** to Sleep (over 1.5 million copies sold worldwide!), You Have to F***ing Eat perfectly captures Mansbach's trademark humor, which is simultaneously affectionate and radically honest. You probably shouldn't read it to your kids.

OMG..too funny. I had heard so much about  Go the F*** to Sleep that when the opportunity to read this one came about, I couldn't say yes fast enough.

I so wish I could read this to my kids. It is what me and so many parents go through Every Single Day! I am soooo getting the kid-friendly version called Seriously, Just Go to Sleep
because seriously...I've had enough. The kids have been off from school for two weeks and they haven't gone to bed before midnight. UGH...No alone time means well...no alone time.

In You Have to F**king Eat parents can see that they are NOT alone. Oh no you are not. We all go through this new, old or indifferent parents will agree that getting kids to eat is stressful and I believe Adam was trying to show parents that they are not alone! The illustrations are awesome with the sweet little face girl and all the adorable kids in the book display the face of many children at dinner time.  It's like a great parent poem that all who deal with kids at meal time will appreciate.

I loved reading this inner monologue of so many parents and totally agree that "my diet is all the bleep you don't eat."

Disclaimer: No monetary compensation was offered to post this. I received an advanced reader copy for my honest opinion.