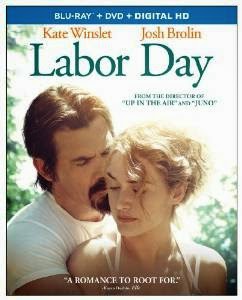 I honestly had no desire to watch this movie nor did I have any high hopes for it. Yesterday I was  looking for a chick flick while the house was busy with football or a computer game and thought if it sucks I will just move onto another movie.

It didn't suck. In fact, the movie was really good even though I didn't understand or even sympathize with some of it.

Kate Winslet plays Adele, a depressed single mother who suffers from anxiety. Her son Henry played brilliantly by Gattlin Griffith who is also the narrator which is voiced by Tobey Maguire.

One day during their occasional trip to superstore Henry bumps into Frank played by Josh Brolin. Frank needs help. He is bleeding and in a passive-aggressive move gets Kate to drive him to her home where he can rest.

Frank is an escaped prisoner whose photo is information is all over the paper and news but there is another story to his case. Frank is on a murder charge that wasn't really his fault (sob). We see in flashbacks what happened to Frank and it is devastating. We also see via flashbacks why Adele has her anxiety and this is where I had trouble but this review is not about me so moving on.

Adele and Frank fall in love. Henry is in dire need of a father figure and Frank just wants to belong.

I loved everything about this movie. It is brilliant and makes you truly care about all the characters.

The story has a sweet, loving ending that made me cry my eyes out but not because I was sad but hopeful!

Winslet did a fantastic job as Adele! Doesn't get better than this!