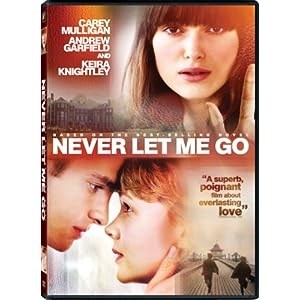 Academy Award® Nominees Carey Mulligan and Keira Knightley, co-star with talented newcomer Andrew Garfield (The Social Network) in this poignant and powerful film. Kathy (Mulligan), Ruth (Knightley) and Tommy (Garfield) are best friends who grow up together at an English boarding school with a chilling secret. When they learn the shocking truth--that they are genetically engineered clones raised to be organ donors--they embrace their fleeting chance to live and love. Based on the acclaimed novel by Kazuo Ishiguro (The Remains of the Day), Never Let Me Go is an intriguing exploration of hope and humanity.

What I Can Tell You:
You may have missed this movie on your radar and placed it in the artsy, independent category of "If I Catch It, I'll Watch It". That my friends would be a big mistake. Based on a book by Kazuo Ishiguro by the same name.

The movie begins set in the 1970's and we are told that life expectancy of people are into the 100's. We are in a British Boarding house called Halisham House, however, the children are not like other children. They are not orphans as I at first expected. They are clones. Children created and raised to be healthy and eventually donate their organs to help others before they reach "even middle age."  The story focuses around Kathy, Ruth and Tommy.  Kathy likes Tommy but when Ruth and Tommy become an item.

When they are old enough to leave Halisham House, they go to "The Cottages" until they are called to be donors. There is no need for life lessons as their only purpose is to donate.

Ruth and Tommy are still together which leaves Kathy to become a carer, a kind of social worker. While at "The Cottages" they hear a rumor from other clones that Halisham kids can defer from donorship.

The three eventually go their own ways until Kathy visits Ruth during one of her post-ops. They visit Tommy, and Ruth tells them that she had been jealous of their "true love" and took Tommy from Kathy. She believes they should be together and tells them she has had time to think about how she could make it right. She wants them to get a deferral and be together.

They seek out a way for the deferral only to hear that there never was one. Their paths is defined and they must fulfill their purpose.

What a crazy world it would be. The viewer is forced to think about the souls of the clones. They are no different than the people they serve and will live the lives they were given. I wish there was more of a back story as to how this type of technology and cloning came to be but atlas, I am left to my own imagination.

The story is very thought provoking and the acting is muted and spectacular.  I was blown away by the calmness and gentleness of the children's destinies are laid before them. What a bizarre, scary, sad, alternate world.

The movie is a must see and I am dying to see it again with someone, to discuss it in detail.

I have never seen Carey Mulligan (Kathy) prior to this movie but she and Keira Knightly (Ruth) were also in Pride and Prejudice together. Will be watching that movie very soon.

Head over to Fox Searchlight's Never Let Me Go website for more on the movie, the story, video, behind the scenes peeks, and more.


Disclosure: I received a screener copy of this movie courtesy of 20th Century Fox for my honest opinion.