We Welcomed December By WatchingTom and Jerry: A Nutcracker Tale Special Edition 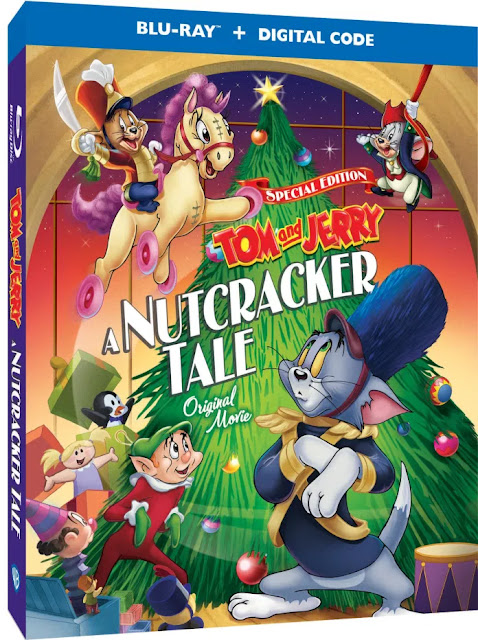 THE LOVABLE CAT AND MOUSE DUO ON

IS AVAILABLE ON BLU-RAY AND DVD

Today we welcome December and the beginning of our Christmas season by watching Tom and Jerry in the magical world of “The Nutcracker” in Tom and Jerry: A Nutcracker Tale Special Edition, the heartwarming animated holiday film.

As a child I was a huge fan of Tom and Jerry and it never changed. I introduced my children to the antics of Tom and Jerry when they were about 3 and 5. What I love about Tom and Jerry is that there weren’t many words. My children could understand it as could those whose first language isn’t English. A cat chases a mouse, the mouse gets away and there is a ton of action. Anyone can understand it. With the Nutcracker our beloved cat and mouse find themselves in a dazzling winter wonderland which has been brought to life through holiday magic and Tchaikovsky’s beautiful music. It’s a hilarious, action-packed adventure the whole family can enjoy together Tom and Jerry: A Nutcracker Tale Special Edition will retail for $19.98 SRP ($24.98 in Canada) for the Blu-ray™ which includes a Digital Code (US and Canada) and $14.97 SRP ($18.94 Canada) DVD.

Produced by Spike Brandt (Duck Dodgers) and Tony Cervone (Space Jam), Tom and Jerry:  A Nutcracker Tale Special Edition tells the story of Jerry Mouse, who is a devoted fan of “The Nutcracker” and is magically transported into his own version of the classical ballet one Christmas Eve. The film is inspired by classic Tom and Jerrycartoon shorts that were originally created by William Hanna and Joseph Barbera. It is a heartwarming, and hilarious take on the world-famous holiday ballet about a little girl who goes to the Land of Sweets on Christmas Eve with her favorite gift, a toy nutcracker, which ultimately transforms into a handsome prince.

After watching the season’s final performance of “The Nutcracker” ballet on Christmas Eve, Jerry dreams of dancing with the beautiful prima ballerina, who captivates him with her graceful performance. After the theater patrons leave, Jerry climbs onto the stage and begins to dance on his own, as Tuffy Mouse cheers him on. Through the magic of Christmas Eve, Jerry is suddenly transformed into one of the dancers. Costumed to look like regal prince, he takes center stage, which turns into a winter wonderland, as all the toy props around him come to life, and music from Tchaikovsky’s “The Nutcracker” begins to play. A petite music box ballerina springs to life and joins Jerry as the two of them dance their way into the Nutcracker’s magical realm. It seems as though Jerry’s “The Nutcracker” fantasy has finally become a reality. That’s until Tom and his band of alley cats enter through the theater’s stage door, capture all the toys and lock the beautiful ballerina in a cage.

“For many, The Nutcracker is a holiday tradition and this entertaining film captures the essence of that classic story with its own unique adaptation,” said Mary Ellen Thomas, Warner Bros. Home Entertainment Senior Vice President, Originals, Animation and Family Marketing. She added, “Tom and Jerry: A Nutcracker Tale Special Edition is a timeless story and it is the perfect holiday movie that kids and adults can watch together. Now fans can enjoy this fun film in gorgeous high definition. This release is a must-have holiday title for your home entertainment collection.”

Tom and Jerry: A Nutcracker Tale Special Edition will be available to own on Digital on October 27, 2020. Digital allows consumers to instantly stream and download all episodes to watch anywhere and anytime on their favorite devices. Digital is available from various retailers including Apple TV, Amazon Video, Google Play, Vudu, PlayStation, Xbox and others.